In its report the JoongAng Ilbo quoted a source as saying that Bosworth’s team may visit South Korea, China and Japan in early September and then head to Pyongyang where he was likely to meet North Korean leader Kim Jong-il.

The itinerary would reinforce Washington’s frequently repeated claim that it is willing to hold bilateral talks with Pyongyang but only within the framework of the six-nation dialogue, which groups together the two Koreas, China, Japan, Russia and the US.

The paper also said that Bosworth would offer a previously-announced “comprehensive package of incentives” in return for North Korea’s denuclearisation.

Among these, the paper said, the US would give North Korea a “security assurance”, promising it would not intervene in Kim’s gradual transfer of power to one of his sons.

The reported offer of direct talks is the latest in a series of possibly peacemaking gestures by the North that analysts say may have been prompted by the enforcing of tough UN sanctions on the country.

Pyongyang recently freed a South Korean worker held for more than four months and has agreed to lift restrictions on border crossings.

On Tuesday North Korea said it had agreed to resume talks this week with South Korea on arranging reunions for families separated during the Korean War.

The reunion programme, organised by the Red Cross in each country, was almost two years ago as relations between the North and South deteriorated.

Last week, North Korean media said that Kim Jong-il had agreed that reunions should resume around the Korean Thanksgiving holiday on October 3.

The last such event was held in October 2007.

The family programme – which arranges meetings but not permanent reunions for families divided by the 1950-1953 war – began in earnest after the first inter-Korean summit in 2000 eased tensions between the two neighbours.

But the programme was shelved amid a worsening of relations after the current conservative government took power in South Korean in early 2008.

More than 16,000 Koreans from both sides of the border have been allowed face-to-face reunions while thousands of others have communicated through video links.

But tens of thousands of family members remain separated and in many cases do not even know if loved ones are still alive. 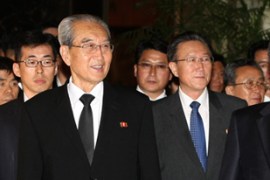