The Council of Ministers also demanded that Syria “hand over all those wanted [by the judiciary] for committing crimes of murder and destruction against the Iraqi people”.

It further demanded that Syria expel “terrorist organisations that use Syria as a base from which to carry out terrorist acts against the Iraqi nation”.

Dabbagh gave no deadline and did not say what measures Iraq would take if the suspects were not handed over.

He also said the cabinet had asked the foreign ministry to petition the United Nations Security Council to create a criminal court to try “war criminals who planned and executed war crimes and crimes against humanity” in Iraq.

SANA reported that the Syrian government rejected the statements made by the Iraqi government.

“Syria categorically rejects the statement of the spokesman of the Iraqi government regarding the bloody attacks in Baghdad last Wednesday,” it said, adding that, “Syria had forcefully denounced this terrorist act which left victims among the Iraqi people.”

At least 95 people were killed and hundreds more were wounded in Baghdad’s bloodiest day since US troops handed over security control to Iraqi forces and moved outside of Iraqi cities nearly two months ago.

On Tuesday, the Islamic State of Iraq, known to be an al-Qaeda umbrella group, released a statement on the internet claiming responsibility for the bombings.

The group named the ministries of foreign affairs, finance and defence among its
targets.

It is impossible to independently verify the claims.

On Sunday, the Iraqi authorities broadcast video purportedly showing a confession from a man who said Farhan gave him orders to participate in the attacks.

Authorities have detained 11 senior Iraqi officials who were in charge of security around the buildings.

Iraq and Syria restored diplomatic ties in late 2006 after a break of 24 years.

Many members of the Baath party fled to Syria after the 2003 US-led invasion of Iraq, when the former ruling party of Iraq collapsed and was banned by the occupation authorities. 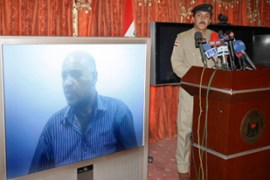 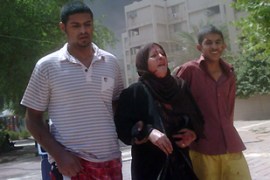 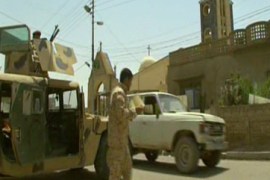