About 50,000 people from Lithuania, Estonia and Latvia have commemorated the Baltic Way, when approximately two million people joined hands in 1989 to form a human chain stretching more than 650km across the three states.

The event two decades ago marked the 50th anniversary of the signing of the Molotov–Ribbentrop pact between the Soviet Union and Nazi Germany when the Baltic states were effectively earmarked for Soviet rule.

Sunday’s commemoration involved thousands of people from the three states taking part in a relay running along the original 678km route, from the capitals of Lithuania and Estonia to the Latvian capital, Riga.

For many in Riga, the relay was more than a celebration of things past, but also a reminder of how people stood together when times were hard.

Times in the Baltic states are hard once again: unemployment has soared, and public services like health and education are on the verge of collapse.

Viviana Purina, 20, says she ran the last three kilometres of the relay to Riga, not just because her parents had always told her about the “big event” they had participated in, but because “with the situation Latvia finds itself in now we have to stand shoulder to shoulder again”.

Janis Vaivads, a former Latvian minister of education, was one of the thousands watching the runners.

He had spent the day reminiscing at a series of events with old colleagues from the Popular Front, the political movement that had helped to force out their Russian occupiers.

“Like I said to my comrades today,” he says, “in the Baltic Way we spoke to the whole world about the Latvian tragedy of 1940.”

He recognised that the dream had been tempered by the current economic situation, but said solutions were out there.

Earlier in the day, Al Jazeera caught up with Dainis Ivans, the then leader of the Popular Front in 1989, at a “multimedia interactive demonstration,” an exhaustive click-and-show presentation of the era, with documents, photos and video.

Until Glasnost, the reforms designed to encourage a spirit of openness in the Soviet Union in the second half of the 1980s, Ivans had been a constant target of the KGB, the former Soviet security agency.

He says that in 1989 he had imagined that, “in 10 or 20 years’ time, if we experience difficult times again, we will remember the Baltic Way and draw strength from it”.

Now, more than ever since its independence in 1991, Latvia needs that strength.

Two weeks ago, London’s Financial Times newspaper reported that Latvia’s GDP had decreased by an annual 19.6 per cent in the second quarter of the year.

Meanwhile, the country’s unemployment rate, which was estimated at 10 per cent for 2009, was expected to grow by the end of the year.

According to Ria Novosti, the Latvian news agency, about 175,000 people of the one million work force are expected to be out of work in 2009. This in a nation of just 2.3 million.

For many people in the Baltic states, commemorative events like Sunday’s are reminders that no matter how painful the economic situation becomes, the peoples of Latvia, Lithuania and Estonia live in their own free country.

And for that they have themselves, 20 years younger, to thank.

Elizabeth Dunningham is a producer for Al Jazeera. 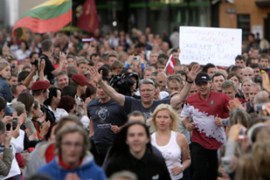 Thousands of people run the ‘Baltic Way’ 20 years after it helped to end Soviet rule.