“What tends to happen in August in Greece – and it happens with a vengeance – is that the hot, dry winds pick up.

“It is those winds which make it so difficult to predict in what direction the fire may be going from one moment to another.

“It is extremely difficult for helicopters and aeroplanes carrying water to get off into the sky … as there are huge palls of smoke over those northern suburbs above Athens and that makes flying very difficult.”

Greek authorities declared a state of emergency in eastern Attica on Saturday where the flames gutted about 30,000 acres of forest, farming fields and olive groves.

Yiannis Sgouros, the Athens prefect, told Greek television: “It is an ecological disaster.

“We are facing a great ordeal,” Costas Karamanlis, the prime minister, said. “The fire department is making a superhuman effort.”

Karamanlis made a helicopter tour of the afflicted area on Sunday and chaired an emergency government meeting.

“The situation is extremely difficult due to the weather conditions,” said Prokopis Pavlopoulos, the interior minister.

Greece has asked its allies for help. Italy, France and Cyprus are expected to send fire-fighting aircraft.

The handling of the fire, the biggest since Greece’s worst wildfires in living memory killed 65 people in a 10-day inferno in 2007, will be crucial for the premier’s political fate as the conservative government gears up for a snap election by March.

Karamanlis’s government, which is clinging to a one-seat majority in parliament, trails the socialist opposition in opinion polls. 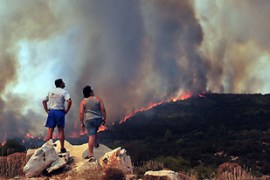 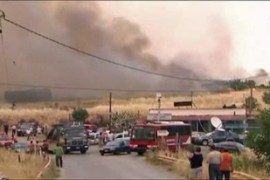 Forest, farmland and vineyards burnt as citizens are evacuated in central Greece.