Morillon said the vote was a “victory for the Afghan people”.

But James Bays, Al Jazeera’s correspondent in Kabul, said: “I’ve spoken to other observers, not from the EU, and they say they are very, very surprised that the EU is hailing this as a success.

The EU monitoring mission also admitted that it had struggled to visit polling stations, managing only to get to six locations across the south of Afghanistan.

Other independent observers warned that turnout in Taliban strongholds in the south may have been as low as 10 and 25-30 per cent for areas such as Kandahar and Helmand respectively.

One foreign official said that the Election Complaints Commission had received 100 formal complaints about irregularities, including “allegations of ballot-stuffing in Kandahar”.

Attacks by fighters during polling claimed more than two dozen lives in what EU observers said were 270 security incidences.

Nader Nadery of the Free and Fair Election Foundation of Afghanistan, an Afghan vote monitoring group, said the Taliban in the country’s south had cut off the fingers of two voters.

He also warned that there had been voting irregularities.

“In some places we did see the independent electoral commission’s staff, at the local level, they were not keeping to a good level of impartiality. Those places need to be looked at carefully,” Nadery told Al Jazeera.

“There were, as an example, issues of underage voting … not a very large number, but that indicates an irregularity.”

In Washington, Barack Obama, the US president, hailed the elections as an “important step forward” for Afghanistan.

Millions of Afghans are thought to have voted in Afghanistan’s landmark elections to choose a new president and 420 councillors across 34 provinces.

But Taliban threats kept turnout low, especially in the volatile south where Hamid Karzai, the incumbent president, was expected to do well in the presidential race among fellow Pashtuns.

Election observers say a second round between Karzai and Abdullah Abdullah, the former foreign minister who draws much of his support from Tajiks in the north, could divide the country along ethnic lines and lead to unrest.

Both Karzai and Abdullah have claimed victory in the presidential race, with the rival camps saying their candidates were on track to win an outright majority of more than 50 per cent and avoid a second round run-off vote in October.

Preliminary results are not expected before Tuesday and final returns in early September. 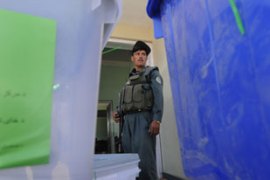