August is the steamiest of months and normally a somnolent time in the US.

Vacations, county fairs, trips to the beach, days by the lake, grilling hot dogs on a stick – these are the happy trifles that Americans have come to expect at summer’s end.

But this year August has been the month of rage.

In made-for-television “town hall meetings” across the country, grey-haired white men and women in t-shirts stand and hurl abuse at their Congress members and senators, snarling and shouting – their eyes popping apoplectically and choking with anger.

People have waved signs depicting Barack Obama, the US president, as Adolf Hitler with a toothbrush moustache, or with a hammer and sickle on his forehead.

Placards denounce Obama as a fascist or a communist, or, in a proud display of historical and political ignorance, both at once.

Lately, men have begun showing up outside Obama events carrying weapons – strutting around like Doc Holliday, an iconic figure from 19th century literature of the Wild West, with six-gun pistols in holsters or, as in Arizona this week, with an assault rifle slung over shoulders.

One person in New Hampshire, with a loaded gun strapped to his leg, held a sign saying: “It’s time to water the tree of liberty” – a phrase taken from Thomas Jefferson, an 18th century American revolutionary and third US president, who wrote: “The tree of liberty must be refreshed from time to time with the blood of patriots and tyrants.”

The clear implication was made even plainer by a man at a meeting in Hagerstown, Maryland who held up a piece of cardboard upon which he had scrawled: “Death to Obama, death to Michelle and her two stupid kids.”

Ostensibly, this outpouring of hatred is all about Obama’s health care reform proposal, which would restrict predatory practises by insurance companies and make it easier for the 47 million uninsured Americans to get health care coverage.

The protesters assert the health plan is merely the thin edge of the wedge for a socialistic overhaul of American society, including “death panels” that will rule on whether individuals are worthy enough to keep alive.

These contemptible fantasies are avidly stoked and facilitated by Republican Party hacks and lawmakers, the big insurance companies and other moneyed interests who will fight dirty to prevent changing the lucrative for-profit health system that is bleeding the country white.

But the sheer manic intensity of the foam-flecked tirades bursting out in the town halls, so out of proportion to their proximate cause, bespeaks much deeper roots of rage.

These are some of the same people who howled “traitor!” and “kill him!” at Sarah Palin’s rallies last year.

They are the ones convinced Obama is a Muslim “sleeper agent” who will destroy American values and hand the country over to Osama bin Laden.

The flip side of their rage is fear. They scream: “We want our country back!” Their country is one where white, Christian conservatives rule.

The idea of a black president and a liberal democratic majority in Congress, elected by a huge landslide margin last November, is simply impossible for them to contemplate without teeth-grinding, choleric eruptions of hatred.

Egged on by a fair number of Republican members of Congress and right-wing talk show bloviators, so-called “birthers” have seized on the idea that Obama is not actually an American – that he was secretly born in Kenya and shipped to the US as a baby.

Therefore, they argue, Obama is ineligible to be president and the office must be handed over to the runner-up in last years election, Republican John McCain who was born – and this is not disputed by anyone – on a US military base in Panama.

There is, of course, no evidence whatsoever to back up this fantasy, but facts – like copies of Obama’s Hawaii birth certificate, the birth announcement in a Honolulu newspaper, photos of Obama’s mother heavily pregnant in Hawaii in 1961 and so forth – appear to be irrelevant. Their goal is to de-legitimise Obama’s presidency.

Racism? Sure. Or as Palin would say: “You betcha!” That’s part of it.

But racism simply compounds something that runs even deeper. This fear of the “other” is not a new phenomenon.

It didn’t start with Obama’s rise to the White House.

In 1964, the great Columbia University historian Richard Hofstadter unravelled what he called the “paranoid style in American politics”.

Panics, conspiracy fears and militant campaigns against outsiders began almost as soon as the republic was founded, Hofstadter writes.

In the 1790s, ultra-conservative elements, particularly in New England, became obsessed with the supposed conspiracies of the Society of the Illuminati (a Bavarian Freemason group) to subvert established religions and overturn all the world’s governments.

In the middle of the 19th century, when hundreds of thousands of Irish and German Catholics began migrating to the US, anti-Catholic hysteria bloomed like a fetid rose.

Jesuits and other priests, and Protestants, were creeping around every corner of the US, determined to enslave the US and carry out a war of extermination against heretics on the orders of the Pope in Rome.

Reputable men, like SFB Morse, the inventor of the telegraph, entertained baroque and bloody fantasies involving Papist plots to install a Hapsburg as Emperor of America.

Bryan drove crowds wild with his thundering speeches, proclaiming, in typically paranoid style: “You shall not press down upon the brow of labour this crown of thorns, you shall not crucify mankind upon a cross of gold.”

By the time of World War One, intense fears of a Bolshevik conspiracy gripped the country.

The federal government arbitrarily arrested thousands of left-wing foreign residents in the US and shipped them back to Europe.

Anti-communist hysteria grew in the 1950s to the national obscenity that has become known as McCarthyism, which ruined countless careers and lives with trumped-up charges and headline-grabbing congressional investigations.

At the same time, the foundations of the modern conservative “movement” that has now taken over the Republican Party were being laid in the ultra-right wing John Birch Society and other conspiracy-minded groups convinced that communist agents had infiltrated the highest levels of the US government.

Another gifted demagogue, Ronald Reagan, broadened the definition of the “enemy” to include the entire federal government.

Millions of people now firmly believe that “big government” is evil, that they should not be forced to pay taxes for any public services and that the true-blue American (white, of course) “goes it alone”, with his grit and his guns, instead of relying on and participating in a wider community.

Of course, these people can realise their dream of living in a no-taxes, no-government, guns-for-all society simply by moving to Somalia.

So, when you see these town-hall hatemongers, gun-toting “patriots” and whacked-out conspiracy theorists on your TV, remember that they are not merely common, garden variety lunatics, but heirs to a rich and time-honoured American tradition.

The last word here must go to the irrepressible representative Barney Frank, the overweight, gay, Jewish Democratic congressman from Massachusetts, who is perhaps the smartest man currently holding public office in America.

Frank was confronted by a woman at a town hall meeting brandishing a poster of Obama-as-Hitler, who took the microphone and demanded: “Why do you continue to support a Nazi policy as Obama has expressly supported this policy? Why are you supporting it?”

Frank responded: “I am going to revert to my ethnic heritage and answer your question with a question. On what planet do you spend most of your time?”

The woman kept talking, unaware that she had just been verbally body-slammed by a master.

Frank observed: “Ma’am, trying to have a conversation with you would be like trying to argue with a dining room table.”

That’s the way to deal with the ignorant, paranoid style. 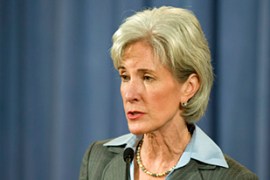 The US administration softens its demand for a government insurance plan. 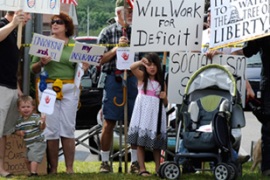 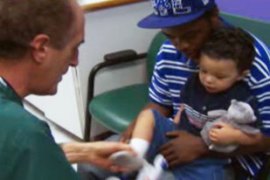 US president says “historic” agreement will cut costs by $2 trillion over 10 years. 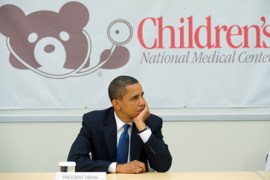 Approval ratings slip for US president as economy staggers and healthcare reform stalls.