Iraq responded to the attacks by arresting 11 senior security officers on Thursday after public anger mounted following the deaths.

The police, army and intelligence chiefs detained were being questioned over security failings that culminated in the attacks, after the government admitted negligence at checkpoints on Wednesday.

Major-General Qassim Atta, a spokesman for the Iraqi army’s Baghdad operations, said regulations prohibit large trucks such as those that exploded from coming close to central Baghdad, where the two ministries are located.

“An investigation has been launched into how these trucks got into the area,” he said.

Wednesday’s attacks were the worst in 18 months.

“This can’t be done even in Afghanistan, or Africa.

“The high officials and security authorities are responsible for Wednesday’s attacks. Such bombings will continue as long as they are still in their posts.”

Atta on Thursday announced new security measures, including an increased troop presence on the ground and tougher searches at checkpoints, after a pledge by Nuri al-Maliki, the Iraqi prime minister, to overhaul security.

Hoshyar Zebari, the Iraqi foreign minister, said that had been “some serious, serious security breaches,” on Wednesday, and that while he could not say who was behind the attacks, their timings were “archetypal of al-Qaeda”.

Elsewhere on Thursday, two Kurdish men were killed and two others wounded when armed men attacked the offices of a political party overnight in the disputed northern Iraqi province of Diyala, security and medical officials said.

Two people were killed and 45 wounded when five mortar rounds exploded in a residential area of Musayyib, 55km south of Baghdad, medics said.

The latest violence comes just ahead of the holy Muslim month of Ramadan and less than two months after US troops withdrew from towns and cities in the conflict-torn country.

The White House described Wednesday’s bombings as “senseless violence,” but the Pentagon noted that they would not affect the US military’s plans to withdraw from Iraq by the end of 2011. 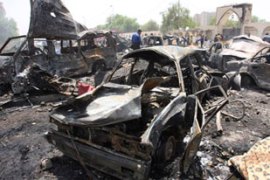 Hundreds killed and hurt in Baghdad

Nearly 100 people die and 500 are wounded in bomb and mortar attacks in Iraqi capital. 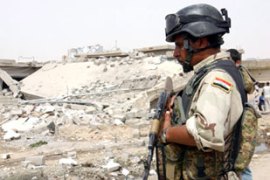 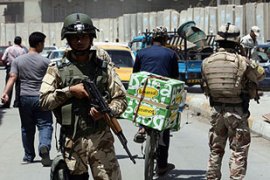 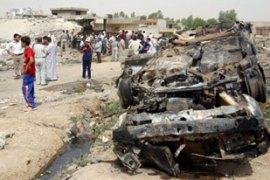