Rosiland Jordan, Al Jazeera’s correspondent in Washington, said: “There is going to be a series of baby steps now, to try to get both sides [the Palestinians and Israel] back to the table and negotiate in good faith.

“What we did not hear from Mubarak was a firm commitment to persaude other Arab nations back into the sphere of trying to work with the Palestinian community but also to show goodwill towards the Israelis. That would have been a notweworthy development had it come about.”

Obama’s statement on Israeli settlement expansion, which Washington has criticised, came after an Israeli newspaper reported that no tenders have been issued for new housing settlement projects since Binyamin Netanyahu became Israel’s prime minister in March, citing unnamed Israeli officials.

Kobi Bleich, a spokesman for Ariel Atias, the Israeli housing minister, refused to confirm or deny the Haaretz report.

Peace Now, an Israeli human right group, agreed with the reports in Haaretz, but said that the Israeli government was allowing 1,000 housing units that are already under construction in the occupied West Bank to continue.

The meeting between Obama and Mubarak came as the US government continues its push towards peace between Israel and its Arab neighbours.

The US has in the past urged Arab states that do not have normal ties with Israel to make incremental steps to recognise it.

The Obama administration has suggested that Arab states could grant permission for Israeli civilian aircraft to fly over their territory, as well as allow Israel to open interest sections in foreign embassies in Arab capitals.

Saudi Arabia has led opposition to the strategy, saying that Israel must commit to an Arab peace initiative which promises a full normalisation in Arab-Israeli relations in exchange for measures which would see the formation of a viable Palestinian state and the right of Palestinian refugees to return to their ancestral lands.

Obama’s effort to keep the pressure on Israel is also facing resistance from some US politicians, especially those on the conservative right.

Visiting Israel this week, Mike Huckabee, who was among the Republican presidential hopefuls in the last election, said: “There is no room for a Palestinian state’ in the middle of the Jewish homeland, and Israel should be able to build settlements wherever it wants.”

He also said: “The question is, should the Palestinians have a place to call their own? Yes, I have no problem with that. Should it be in the middle of the Jewish homeland? That’s what I think has to be honestly assessed as virtually unrealistic.”

Although Mubarak has now met Obama for the third time in as many months, he was making his first visit to the United States since 2004.

The visit to Washington marks a further thaw in relations between the US and Egypt after former US President George Bush had criticised Cairo’s human rights record.

Fawaz Gerges, a professor of Middle Eastern studies at Sarah Lawrence College in New York, said: “There have been some major tensions between the US and Egypt, in particular during the Bush administration.

“This is the first visit by Mubarak in five years – he used to visit Washington every year – because Mubarak was extremely angry that President Bush was very aggressive in pushing the promotion of the democracy agenda,” he told Al Jazeera.

“What President Obama is trying to do is reset Egyptian-US relations to pre-Bush administration – that is, to focus on stability, security and peacemaking as opposed to the question of human rights, democracy and the rule of law.”

Mubarak on Tuesday praised Obama’s keynote speech in Cairo in June, in which the US president pledged “a new beginning” in relations between the Islamic world and the US.

“He came to give his address, it was a very strong address and it removed all doubts about the United States and the Muslim world,” Mubarak said after meeting Obama.

“The importance of the Cairo visit was very appreciated by the Muslim Islamic world because the Islamic world had thoughts that the US was against Islam … But his great, fantastic address there has removed all those doubts.” 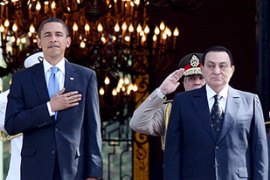 Egyptian president and US secretary of state discuss Arab-Israeli peace and Iran.