Mubarak will also meet James Jones, the US national security adviser, and Dennis Blair, the US director of national intelligence, during his visit, Ahmed Abul Gheit, Egypt’s foreign minister, said.

“The visit now comes at a critical time because the American side is coming closer to announcing its vision on how to achieve peace and end the Israeli-Palestinian conflict,” Abul Gheit, told al-Ahram, an Egyptian newspaper, on Saturday.

Michele Dunne, who focuses on Arab politics and US-Middle East policy as a senior associate at the Carnegie Endowment for International Peace, said Mubarak’s trip had two main aspects.

“One is the renewal of the US-Egyptian relationship, because President Mubarak was somewhat on the ‘outs’ of the Bush administration [the previous US administration]. He seems very much back in with the Obama administration and the Egyptians want everyone to know that,” she told Al Jazeera.

“The second aspect is the Arab-Israeli peace process – it is anticipated that President Obama is going to be coming out with an initiative of some kind very soon, maybe in the next couple of weeks.

“President Mubarak thinks this is a very important time to get to Obama and convey his ideas before Obama announces his initiative.”

The US has in recent months placed more pressure on Israel’s government to order a halt to settlement-building activity on land designated for a future Palestinian state.

However, it has also urged Arab nations to normalise relations with Israel.

Egypt formally recognised its northern neighbour in 1979, while Jordan signed a peace treaty with Tel Aviv in 1994, but other Arab states have refused to normalise ties.

Cairo has in recent months mediated between Israel and Hamas, the Palestinian organisation which refuses to recognise Israel, as part of efforts to forge a lasting peace settlement.

Egyptian officials have also served as the interlocutor between Hamas, which has de facto control of the Gaza Strip, and Fatah, a Palestinian group that has held talks in the past with Israel.

Attempts by Egypt to kick-start Israeli-Palestinian peace talks have so far proved unsuccessful, while Hamas and Fatah remain at odds. 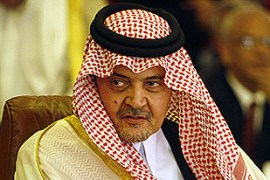 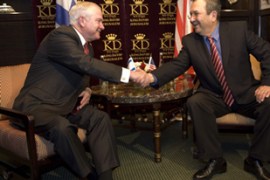 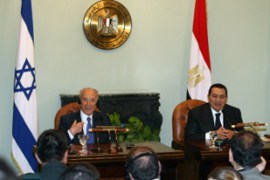 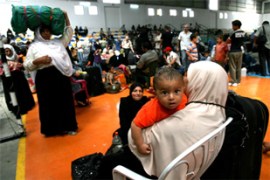 Police arrest 32 Muslim Brotherhood members as part of a crackdown by security services.