He said defence lawyers have said the accusations are much stronger than their clients’ actual crimes.

“One of the [defendants] has said that he has had some confessions during the interrogation just to release himself, but none of them are true,” Ronaghi said.

Sunday’s hearing marked the third mass trial of more than 100 prominent opposition supporters and activists accused of offences ranging from rioting to spying and seeking to topple Iran’s rulers.

A French woman and two Iranians working for the British and French embassies in Tehran have also been tried.

They were among hundreds of protesters, activists and journalists detained in a government crackdown following the unrest, which left at least 20 people dead.

At the first hearing held earlier this month, a number of defendants confessed to organising the violence and said that the opposition claims that the election was rigged were a pretext for the riots.

Our correspondent said the trials are likely to go on for quite some time.

“We have heard more than 100 people being put on trial, but we have only heard the defence of about 10 of them,” he said.

The US, France, Britain and the EU presidency have condemned the trials.

The June election returned Mahmoud Ahmadinejad, the country’s president, to power, but the opposition insists the vote was rigged. 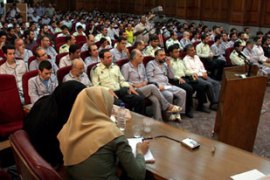