For his part Aso urged voters to stay the course with the LDP, promising stability and continuity while Hatoyama vowed an Obama-style message of “change”, pledging to end what he called the “business-as-usual” style of Japanese politics.

Hatoyama has pledged to build a more caring society in the world’s second largest economy, promising to avoid tax hikes and to boost household incomes to stimulate the economy.

Speaking in Wednesday’s debate, the DPJ chief attacked Aso’s party for increasing debt and said that “anyone can run the government if governing means borrowing money and asking people to pay more taxes”.

Aso said the LDP would take steps to “expand the size of the economy first to realise a recovery. That’s the difference”.

“The DPJ’s set of policies doesn’t have a growth strategy,” he said.

“They promise spending and programs that will cost money, but they do not explain how to pay for these things… This is irresponsible.”

On the topic of national security and Japan’s international role, Aso criticised the DPJ for opposing legislation to enable Japan to inspect North Korean ships as part of UN sanctions against Pyongyang.

“It is the North Koreans who are most delighted at this move,” Aso said, implying that his opponent was soft on security issues.

Hatoyama denied that his party planned to block the move and said “we understand that we need to take a hard line against North Korea”.

The DPJ leader has recently stepped back from a pledge to end the mission immediately, saying now that he would allow it to continue until January.

The DPJ, highlighting Japan’s pacifist constitution, has long argued that the country should not take part in “American wars” and should instead focus on humanitarian aid.

“I believe there are other ways that Japan can contribute to Afghanistan that Karzai will be grateful for,” Hatoyama said, referring to the Afghan president.

Aso’s LDP has lost four straight regional elections since April to the Democrats, raising pressure on a prime minister who has seen his popularity ratings plunge to record lows.

While polls indicate the LDP remains the underdog in the upcoming vote, analysts have cautioned that Japanese voters are traditionally risk-averse and the large proportion of who remain undecided suggests that both parties have yet to energise the campaign.

Aware of possible defeat, Aso was quoted earlier this week said that an electoral loss should be accepted gracefully.

Speaking on the campaign trail near Tokyo on Wednesday, he was reported by Japanese media to have recalled advice once given to his grandfather, Shigeru Yoshida, by Japan’s last wartime prime minister.

According to the Asahi Shimbun newspaper, Suzuki had advised Yoshida to face defeat like a carp on the chopping board.

“A carp, once it’s on the chopping board, doesn’t flinch even when the knife touches it,” the paper quoted from Yoshida’s memoir. 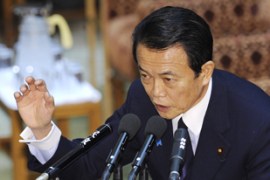 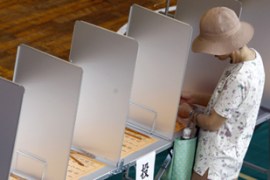 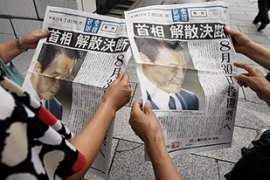 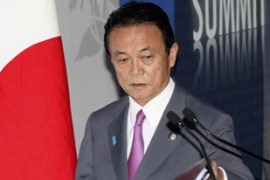