Despite the massive rescue operation, however, officials say up to 1,000 people remain unaccounted for.

Al Jazeera’s Steve Chao, reporting from the heart of rescue efforts in southern Taiwan, said with the only road into several remote villages still washed out, medical teams were still being forced to wait to get to the disaster zone.

Engineers involved in trying to clear away mud and debris said it might take days to clear a path for rescue teams to get in.

The government has confirmed 63 deaths from the disaster so far and the military has flown more than 100 helicopter trips to ferry out survivors, a few at a time, but the process is painfully slow and dangerous.

In the village of Hsiao Lin, soldiers touched down to a scene of utter devastation.

Huang Yi-bin, the deputy minister of Taiwan defence, said the “entire village is buried” by mud.

Two hundred homes and hundreds of people are feared to have been buried after torrential rains caused a massive mudslide to cover the village.

Villagers were taken by surprise by the typhoon’s arrival as it had been forecast to head north, but instead turned south to unprepared areas, our correspondent said.

Survivors’ fear, grief and frustration are beginning to boil over, with villagers expressing their anger and surrounding Liu Chao-shiuan, Taiwan’s prime minister, when he visited a village in central Taiwan on Tuesday.

Some of those who had been rescued from the devastated south tussled with police at a rescue centre at Cishan Junior High School in Kaohsiung county, demanding to be allowed to return to their villages to help family members who were still trapped.

It later weakened to a tropical storm but still wreaked havoc on China’s southeastern coast, triggering a massive landslide in Zhejiang province that toppled six apartment buildings and buried an unknown number of residents late on Monday. 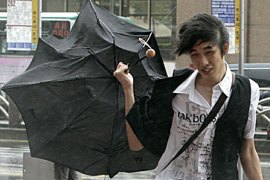