“There was considerable support for the principle of a statement, but a number of delegations wanted to refer the statement back to their capitals overnight for advice and instructions,” John Sawers, the British ambassador to the UN, said on Tuesday.

The European Union has vowed to bring new sanctions against Myanmar following the verdict, saying it would “respond with additional targeted measures against those responsible for the verdict”.

“In addition, the EU will further reinforce its restrictive measures targeting the regime of Burma/Myanmar, including its economic interests,” the Swedish EU presidency said in a statement.

An EU said the 27-nation bloc had launched a “written procedure” to boost sanctions, which will come into force on Friday, as long as EU capitals do not oppose the move.

Hillary Clinton, the US secretary of state, added her voice to calls to release the pro-democracy icon, along with other political prisoners.

“We also call for the release of more than 2,000 political prisoners including the American John Yettaw,” she said while on an official visit to the Democratic Republic of Congo.

In Australia, the country’s foreign minister said he had asked the ambassador to  Myanmar to convey the government’s sentiment of dismay to the ruling generals.

“The regime still has the opportunity to set aside the conviction and sentence, release Aung San Suu Kyi and move down the path of national reconciliation,” Stephen Smith said.

“Australia and the international community stand ready to assist Burma if the regime moves towards democracy,” he said, using Myanmar’s former name.

Protesters across Asia and in some European capitals have also held demonstrations calling for the immediate release of the 64-year-old.

Rallies were held in Thailand, Japan, South Korea and the Philippines, before  the Myanmar court ruled Aung San Suu Kyi was guilty of violating security law.

Following the verdict, activists gathered in London, Britain’s capital, outside the Myanmar embassy, to demand her release. 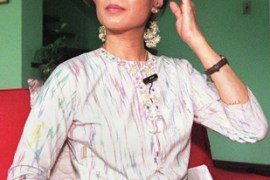 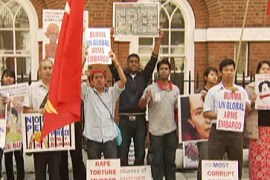 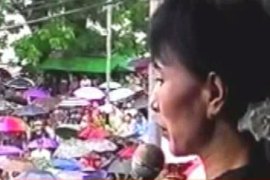 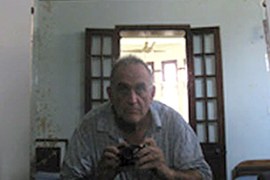