DR Congo’s government, which is led by President Joseph Kabila, has said that its operation against the rebels, who are accused of killing hundreds of civilians, has been successful so far.

But the United Nations has accused government forces and the rebels of committing human rights abuses in DR Congo, including mass killings, rape and lootings.

Clinton, who met victims of sexual violence during her visit to Goma, said that Kinshasha and 17,000 UN peacekeepers in the east of the country must do more to punish those who attack civilians.

“The atrocities that so many have suffered distils evil into its most basic form,” she said.

“Those who attack civilian populations using systematic rape are guilty of crimes against humanity.”

Clinton held brief talks with Kabila before heading to Mugunga, a refugee camp outside Goma where about 18,000 people are sheltering.

“I told President Kabila we want to help end the violence so that you can go home,” she told Chantal Mapendo, head of a women’s group in the camp.

The US secretary also spoke on the trade in minerals such as cassiterite and coltan, which are dug in eastern Congo for use in electronic devices.

Proceeds from the sales of those minerals often go to fund rebel groups.

“The international community must start looking at steps we can take to try to prevent the mineral wealth from the DRC ending up in the hands of those who fund the violence,” she said.

Clinton is on a seven-nation, 11-day trip to Africa. She is due to visit Nigeria on Wednesday to focus on efforts to fight corruption. 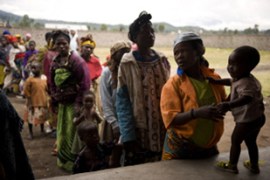 Secretary of state says government must guarantee safety of women in war-torn east. 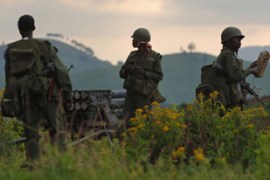 US secretary of state to focus on calls to tackle sexual violence in east of country.