Sotomayor, the first supreme court judge to be appointed by Barack Obama, the US president, is, at 55, the second youngest of the court’s members.

Her nomination was intensely debated, with some Republicans opposed to her appointment arguing that she was biased in favour of Hispanics and that ethnicity and gender could play a role in her judicial decisions.

In some speeches her critics referred to as evidence, Sotomayor said a “wise Latina” might reach a better legal decision than a white man.

Sotomayor said that the comments, made in addresses to women’s and Hispanic legal groups, were aimed at motivating young people to enter the legal profession.

Democrats, who have control of the senate, said Sotomayor was the ideal candidate for the nine-member supreme court.

The court has been closely divided with four liberal and five conservative members, and Sotomayor’s appointment as the replacement to Justice David Souter, a liberal who retires from his position this year, kept that balance. 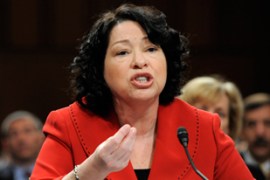 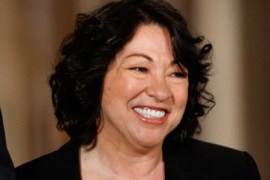 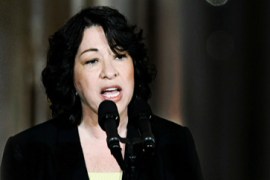 If confirmed, Sotomayor would be the first Hispanic woman in the supreme court.