The windows of shops and restaurants in the city were taped up, while excavators were working to clear roads, as motorists waited in their cars.

Domestic flights and some international flights have been grounded and power outages and landslides have been reported in the north of Taiwan.

Steve Chao, Al Jazeera’s correspondent in Taipei, said: “The rain continues to pour down here in the capital and the winds continue to gust.

“This is a city of three million people and a lot of the population are heeding the government’s call to stay at home, the streets are mostly empty.

“The weather bureau has warned that the typhoon has slowed down considerably in recent hours, which is concerning because as it tracks across the island if it goes slowly there is a greater chance of significant damage.”

Across the 160km-wide Taiwan Strait, China evacuated more than 20,000 people from coastal areas in Fujian province, where the typhoon was also forecast to make landfall on Saturday.

As during other recent storms, authorities sent more than eight million text messages to mobile phones to warn residents in far-flung areas of the storm’s approach.

In the Philippines, where Typhoon Morakot had earlier struck land, 12 people were killed north of Manila, the capital, after the typhoon caused major flooding and landslides on Thursday.

Two French tourists and a Belgian, along with two of their guides, were killed after their hiking group were caught in heavy rain caused by the storm.

A spokesman for the French foreign ministry in Paris said: “A group of French nationals on an excursion in Mount Pinatubo province were taken by surprise by rising water levels while crossing a river by car.”

Six French tourists and three South Koreans who were also on the hike were rescued by an air force helicopter.

In the northern resort city of Baguio, three children were killed after the rain triggered a landslide that buried their shanty town, a local police official said.

In Zambales province, near Pinatubo, the heavy rain caused a dike to burst, flooding 10 villages and leaving a husband and wife dead, said Amor Deloso, the province’s governor.

The floods also washed out a major bridge and forced some 2,100 people to flee their homes for evacuation centres.

Deloso appealed for more assistance, saying some residents were isolated by floods and were forced to climb up trees to avoid the rising waters.

Two other locals died near Pinatubo in separate incidents. 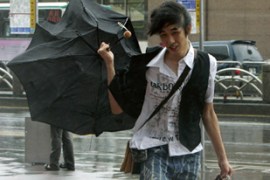