Kanayama said the first-quarter results were “certainly severe” but there were some “bright signs” for September onwards.

“Various cost cuts will also take effect,” he said, although he added that “business demand is unlikely to recover sharply”.

The Japanese carrier is the latest in a string of airlines to announce losses as traffic volume plunges and firms cut back on business travel.

Last month British Airways said it lost $245m in the April to June quarter, with the airline’s CEO warning the company was in a “fight for survival”.

Ahead of Friday’s results JAL announced plans to implement further drastic cuts to its international and domestic flight services as it braced for a second straight year in the red.

The move comes after passenger demand on JAL’s international routes plunged 18.6 per cent in the first quarter while domestic routes saw a fall of 12.4 per cent.

It plans to axe flights on eight international routes within Asia starting October 25, and suspend services from Nagoya in central Japan to Paris and Seoul.

The company said the number of flights on six domestic routes would be slashed with plans to use smaller planes on 14 of its international routes.

According to the International Air Transport Association, the global airline industry could lose $9bn this year as global recession is compounded by the H1N1 virus outbreak.

Last week All Nippon Airways (ANA), Japan’s second-largest carrier, posted a net loss of 29.2bn yen for the quarter ending June, compared with a profit of 6.6bn yen in the same period the previous year.

ANA has said it aims to return to profit by this fiscal year ending March 2010, helped by cost cuts and an expected gradual improvement in passenger volume. 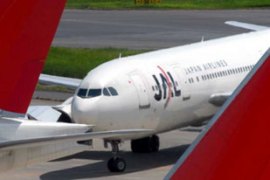 Japan Airline is to receive $1bn in government assistance.