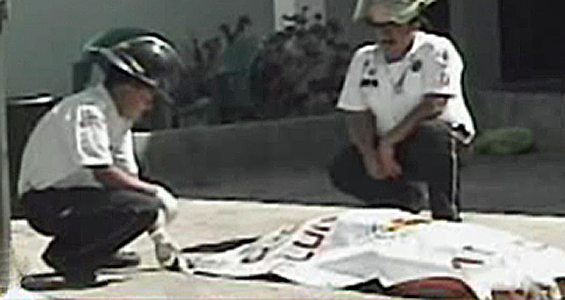 A white sheet covers another victim of Guatemala City’s violence in District 16.

Jocelyn was shot dead while walking home. She was only 17-years-old.

Her family has no idea why she was killed. Her murder, like so many others in this country, will probably remain unpunished.

Situations like this one have become regular in Guatemala as violence against women – termed “femicide” – continues to increase.

The savage methods being used by street gangs in their fight against each other are now being used against women.

Gang-related violence has increased sharply here in recent years, amid an increase in drug-trafficking activity.

But while the murder rate cuts evenly across both sexes, women’s groups point out that females are often killed simply because of their gender.

The pattern of violence includes sexual assault and physical torture before the women are killed and their bodies dumped in public places.

Odilia Sanchez’s niece was raped and killed by three men hoping to rise through the ranks of their gang. She was only three-years-old.

Her father found her dead, naked and badly beaten after searching for hours.

Two of her killers were stoned to death by the community and then set on fire.

This is a common practice in poor communities where the justice imposed by the state is non-existent. Afraid of revenge, the little girl’s family fled town.

We found them hiding in a small house in the capital.

“I am afraid for my family so I brought them all here” Odilia Sanchez told Al Jazeera.

Those who dare challenge the power of men in Guatemalan society often pay with their lives and only two per cent of crimes against women are solved.

Adela Chacon Tax was tortured and stabbed to death by a man whom she refused to date.

Her body was thrown in a ditch in Escuintla, in the southern part of the country.

She left behind three children, who continue to visit the humble tomb where she is buried.

Catalina Fajarto Perez, her sister, told Al Jazeera: “There are other cases like her. After my sister was killed the bodies of two other women appeared. There is impunity and nobody really cares.”

We went along with her family to see her accused killer face trial.

Her two young children could not stop crying.

The trial was being pushed by Norma Cruz, a lawyer who has become a champion for abused women across the country.

She leads the non-governmental organisation Survivors and helps abused women and the family members of those who were killed fight for justice.

“We are a society that has gotten used to death,” she said.

“We had the longest civil war in Latin America with thousands of people dead, so people here take it as something normal.

“Women are not seen as great contributors to the country, so violence against them seems to be acceptable.”

Others also blame much of the violence against women on the country’s 30-year civil war.

In a country ensnared by residual violence from Central America’s longest-running internal conflict, where many of the crimes committed by the state and anti-government fighters remain unpunished, murders are not front-page stories – especially when those killed are women in what is a predominantly paternalistic Guatemalan society, critics say.

According to a Guatemalan Human Rights Commission report, femicide is often carried out with “shocking brutality”.

A contributing factor to the continued crime is the absence of state guarantees to protect the rights of women, the report says.

But the hard work of women’s rights groups has seemingly paid off.

In April 2008, Guatemala passed a law against femicide, which officially recognised it as a punishable crime.

However, much more is needed to fight this battle as the crimes against women continue and perpetrators remain unpunished.