Iraq’s autonomous Kurdish region has been at the centre of rising tensions with the federal government in Baghdad following a number of disputes over power sharing, land, oil contracts and drilling.

Nouri al-Maliki, Iraq’s prime minister, made his first trip to the region in more than two years on Sunday in a bid to resolve key disputes over land and oil.

Both al-Maliki and the Kurdish leaders tried to downplay their long-standing differences in public, with al-Maliki telling reporters: “Differences of opinion are very normal because we are building a state on the ruins of dictatorship … I think we largely agree, and if there are disputes, they are small.”

The rising tensions had triggered speculation of an eventual armed clash between Baghdad and the region, which won its autonomy with US backing, after the 1991 Gulf War.

He told them time was running out for the US presence in Iraq and that all sides had sacrificed too much in lives and treasure to see security gains lost to political differences.

The US military is closely monitoring the situation and has set up liaison offices with commanders of Kurdish militias and Iraqi government forces to try to prevent tensions from escalating.

General Ray Odierno, a top US commander in Iraq, described the tension as the “number one driver of instabilities” in the country.

During his recent visit to Washington, al-Maliki acknowledged that these tensions were among “the most dangerous issues that have been a concern for all the Iraqi government”.

Observers believe the Kurds and al-Maliki’s Shia Arab-led government disagree over the interpretation of some Iraqi constitution articles regarding oil and exploring contracts, the status of oil-rich Kirkuk and power sharing in the country.

The Kurdistan region’s recently established constitution, which claims lands outside of its current borders, has further deepened the rift between the two parties.

Haroun Mohamed, an Iraqi political activist and columnist, says: “The main issue lies in the constitution. Kurds and leading political entities have contributed to this constitution, they wanted [it to be] vague and confusing.

“The problem now is each one of the two parties reads the constitution from the angle that suits him and insists that his reading is the right one.

“What makes things even more complicated [is that] there is no national and independent constitutional body to settle the disagreement; even the constitutional court [is] set up on a quota basis, which means there is always a judge [who] would disapprove any resolution [that is] not in his party’s favour.”

Prisoners of the past

Kurdish politicians accuse the Baghdad government of being a prisoner to decades of centralised rule.

Mohammad Ihsan, the region’s minister for extra-regional affairs, said: “Al-Maliki’s visit to Kurdistan was a turning point in Kurdistan-Baghdad relations. The problem is not in the constitution, the issue is Iraqis are still unable to adapt to the new situation.

“They are still prisoners to decades of central rule. They just cannot digest the constitution they voted for. [The] Iraqi federal court is highly qualified to end the disagreement legitimately but again they will not be able to deal with it.”

Abd al-Hadi al-Hasani, a member of parliament from al-Maliki’s al-Dawa party, accused the Kurds of holding a separatist agenda.

“Our Iraqi Kurds interpret the constitution with a separatist spirit. They put their ethnicity before their national identity. They are Kurd Iraqis but we describe ourselves as Iraqi Arabs,” he said.

“The other issue with them is they always follow status quo policy, they act and then notify you and tell you we are ready for negotiations. Their new constitution for example, they showed to no Iraqi body, their parliament issued it and it is now waiting for referendum. Iraqi government or parliament knew nothing about it.”

While the Kurd’s separatist agenda comes to the fore, some voices favour staying within the Iraqi state.

Farsat Marie, a Kurdish political activist and professor of history in Duhuk Governorate, said: “I think the drive for independence will not benefit the Kurdish people. Iraq’s Kurdistan has always been part of Iraq.

“Kurdish politicians realise that Kurds are emotional people and they know how to touch that nerve, but they should ask first, will an independent state be able to survive [within] our volatile region?” 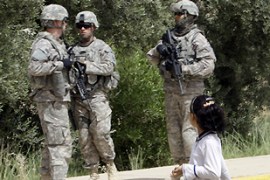 Officials to hold talks aimed at resolving disputes over oil and land. 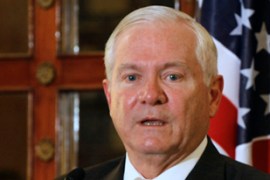 Robert Gates in Iraq to discuss future role of US military and regional reconciliation.