Most of the other nine people being treated for the disease are relatives of the herdsman, according to the local health bureau.

Police set up checkpoints around Ziketan after the outbreak was first detected last Thursday and the town since been put under quarantine.

Health officials have given no indication as to when the quarantine would be lifted but say that Ziketan had enough supplies to get by on its own for the time being.

The deaths come as Russian authorities announced they would increase monitoring at its border with China following the outbreak.

“Control over people crossing this border will be stepped up, including both Chinese and Russian nationals,” Gennady Onishchenko, a leading health expert, told the RIA Novosti news agency.

According to the World Health Organisation (WHO), pneumonic plague is spread through the air and can be passed from person to person through coughing.

It is one of the deadliest infectious diseases and can kill humans within 24 hours of infection, the WHO says.

Vivian Tan, the WHO spokeswoman in China told the Associated Press that the country reported the first death and 11 other cases to the organisation on Saturday.

It is caused by the same bacteria that occurs in the bubonic plague, or the Black Death, that killed an estimated 25 million people in Europe during the Middle Ages.

In 2004, eight villagers in Qinghai province died of the plague, most of them infected after killing or eating wild marmots – an animal related to gophers and prairie dogs.

They live in the grasslands of China’s northwest and Mongolia, where villagers often hunt them for meat. 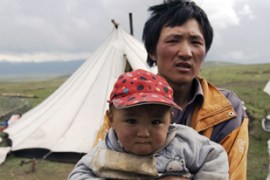 Town sealed off after two people die from pneumonic plague in northwestern China.