Clinton was travelling with US government officials to seek the release of two jailed US journalists, South Korea’s Yonhap news agency cited a source as saying.

The former US president, who flew to the capital on an unmarked jet on Tuesday, is the highest-profile American to arrive in the North Korean capital in nearly a decade.

He was greeted at the airport by North Korean officials, including Kim Kye Gwan, who has been the North’s chief negotiator in nuclear negotiations.

Kim hosted a dinner for Clinton at the state guest house and received the message from Obama, according to Radio Pyongyang and the Korean Central Broadcasting Station.

The White House said Clinton was travelling on a “solely private mission” and refused to comment so as not  to “jeopardise the success” of his trip.

Journalists Laura Ling and Euna Lee were sentenced in June to 12 years of hard labour after being found guilty of entering the country illegally.

Speaking to Al Jazeera, Jasper Becker, the publisher of Asia Weekly magazine, said that Clinton’s trip to North Korea was a “great triumph” for Kim.

Becker said: “It’s very reminiscent of what happened in 1994 when Clinton was in his first term as president and he sent Jimmy Carter to North Korea at a time when the two countries looked as if they were about to go to war.”

“Kim Jong-Il is quite desperate to achive a breakthrough [in relations with the US], he’s in very poor health and he has to settle the succession before he dies.

“And it’s crucial for him to gain this diplomatic recognition from the United States and end the state of quasi-war between the two countries.”

North Korean authorities say the two female reporters crossed illegally to its side of the border with China, although other reports have suggested the two were on the Chinese side when they were arrested.

It said they crossed the border illegally “for the purpose of making animation files to be used for an anti-DPRK [North Korea] smear campaign over its human rights issue”.

Analysts say the sentences appeared unusually harsh and seemed to back up views that the journalists could be used as a bargaining chip by the North in its nuclear standoff with the US.

The pair worked for the California-based Current TV, co-founded by Al Gore, who was Clinton’s vice-president.

Clinton’s visit has raised speculation that he may raise other issues with the North Koreans beyond the release of the two journalists.

North Korea has pulled out of six-party talks on its nuclear programme, expelled nuclear inspectors and test-fired a barrage of missiles in defiance of the sanctions.

It has also repeatedly issued bellicose rhetoric against South Korea and the US, but indicated last week that it was open to direct talks with Washington.

Speaking to Al Jazeera Richard Broinowski, a former Australian ambassador to South Korea, said he believed Clinton could be on broader mission to find a new way for the US to engage with the North Korean leadership after years of escalating tensions.

“Things have been spinning out of control in North Korea,” he said, noting recent allegations over its military connections to Myanmar connection, rising anti-North Korean enmity in Japan, and uncertainty in South Korea.

“All of these add up to a situation that is very tense and that could become some sort of trip wire for an unintended conflict,” Broinowski said.

In such a situation, he said, it was possible that Clinton could act as a “circuit-breaker” opening the way to renewed talks with North Korea, rather than confrontation.

Clinton’s visit is the second time a former US president has headed to North Korea to try to defuse a crisis.

Former president Jimmy Carter flew to Pyongyang in 1994 when tensions were running high, again over the North’s nuclear weapons programme.

Aides to Clinton’s wife Hillary, the US secretary of state, said they would have no comment on the visit until he had left Pyongyang.

“While the mission is in progress, we will have no comment,” one official was quoted as saying.

“Our interest here is the successful completion of the mission and the safe return of the journalists.”

Hillary Clinton, who is headed for a trade conference in Kenya, incurred the fury of Pyongyang’s leaders last month by likening them to unruly children demanding attention, adding that they did not deserve it. 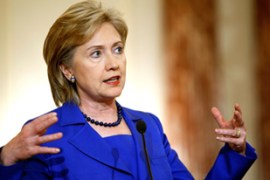 US says using all channels to gain women’s release as families plead their case. 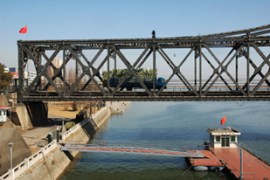 US journalists held in North Korea accused of entering country “with hostile intent”. 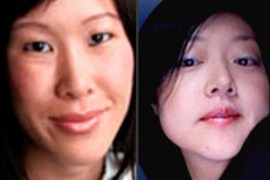 Two US journalists held in North Korea are being investigated for spying, report says.