Nato took over some operations in Afghanistan six years ago, but a rising number of civilian casualties because of attacks by western forces has fuelled Afghan anger.

James Bays, Al Jazeera’s correspondent in Kabul, said while there was talk of doubling Afghan’s army, Nato does not have the role in Afghanistan that it used to have.

“We have all US and Nato forces under the command of one man, a US general. America is in the driving seat,” he said.

“Nato and other countries are in many ways the passengers.”

Speaking to Al Jazeera, James Appathurai, a Nato spokesman, said: “It is not for Nato to decide what national policies are … but certainly … the Nato secretary general would like to see the greatest possible number of Nato allies in this mission, the mission is unfortunately not complete.”

Rasmussen took up his duties on August 1, but Monday marks his first day as secretary general of the Western military alliance.

He takes over from the Netherland’s Jaap de Hoop Scheffer, who held the role since 2004.

In Monday’s speech, Rasmussen called for a “strategic partnership” with Moscow a year after the war between Russia and Georgia triggered the worst tension between the Kremlin and the West for nearly two decades.

Appathurai said: “The bottom line is … we know there are real reasons why Nato and Russia disagree on things.

“We have fundamentally different points of view on basic issuse like Georgia for example.

“But it is also true we have fundamental areas of convergence, where we share an interest that instability and extremism doesn’t spread out of Afghanistan.”

Rasmussen almost lost out on the job earlier in the year after Turkey, a key Nato member, opposed his appointment, only backing down after he vowed to seek better relations with the Muslim world.

Relations between Denmark and the Muslim world came under strain in 2005, during Rasmussen’s premiership, after Danish newspaper Jyllands Posten printed cartoons of the Prophet Mohammed.

Despite global protests, Rasmussen refused to condemn the publication.

On Monday, Rasmussen said Nato’s relations with Muslim nations in groups such as the Mediterranean Dialogue (MD) and Istanbul Co-operation Initiative (ISCI) were a priority.

The MD is a 10-year old forum between Nato and Algeria, Egypt, Israel, Jordan, Mauritania, Morocco and Tunisia, while the ISCI, a newer initiative, promotes co-operation between the alliance and Bahrain, Kuwait, Qatar and the United Arab Emirates

“Let me assure [these] countries… that I am fully committed to building stronger relations with them on the basis of mutual respect, understanding, trust and to face common challenges – terrorism, proliferation and the dangers of failed states,” Rasmussen said.

In an interview published in the Danish newspaper Politiken on Saturday, Rasmussen said he would support dialogue with “moderate groups on the outer reaches of the Taliban”.

“There is certainly a hard core that is impossible to reach any deals with. They have only respect for military powers,” he was quoted as saying.

“But there are groups that you can talk with to try and bring about some kind of reconciliation with the Afghan community.”

He continued: “I certainly don’t know why one should strike any agreements with those who are killing our soldiers. We are talking about other groups located on the outer fringes of the Taliban.” 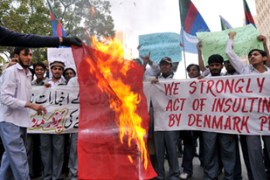 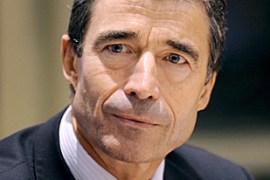