Officials suggested the disturbances, which began on Thursday but calmed before flaring again Saturday, had been instigated by members of a banned Muslim organisation.

Rehman Malik, Pakistan’s interior minister, said: “Usually, Muslims and Christians live together peacefully. There have been some miscreants involved in this incident. We are investigating that.”

Mohammed Saleem, a correspondent with Pakistan’s Dawn newspaper, told Al Jazeera: “It’s yet to be ascertained what caused the incident, but the government officials say that … they have taken into custody two dozen people associated with the banned organisation of Sipah-e-Sahaba.”

The outlawed group has in the past been accused of attacking security forces.

Rana Sanaullah, the provincial minister for law, who is also responsible for security matters of Punjab, condemned the attack and said that a preliminary investigation had showed there had been no desecration of the Quran.

“It was just a rumour which was exploited by anti-state elements to create chaos,” he said.

Rights groups accused the police of failing to respond quickly enough to prevent the violence from escalating.

Pakistan is a predominantly Muslim nation and religious minorities, including Christians, account for roughly four per cent of the 170 million population.

Muslims and minorities largely live in harmony but there have been periodic attacks on Christian targets in Pakistan. 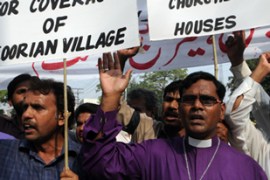