The two days of talks, dubbed the “strategic and economic dialogue” brought together top level officials from the world’s biggest developed and developing economies.

Clinton said Chinese and US officials had agreed to push for global economic recovery, promote stability through six-party nuclear talks in northeast Asia and address ongoing security threats in central Asia and the Middle East.

She added that China shared US worries over North Korean and Iranian nuclear programmes and both agreed that negotiations were the only way to deal with North Korea’s recent missile and nuclear tests.

While Clinton conceded that the talks had yet to yield concrete results, she said the laying of the groundwork “to create confidence and understanding is a very good investment”.

On the economic front Timothy Geithner, the US treasury secretary, said the two sides had agreed to step up efforts to reconfigure their economies so that China’s growth is less reliant on exports and the US resumes saving and investment to stop the boom-and-bust cycle.

“China will rebalance towards domestic demand-led growth,” Geithner said, while the US had already learned the “importance of living within our means as a country and at a household level”.

“The most important thing we achieved today was to agree on this broad framework for policies and reform… to help lay the foundation for a more sustainable , more balanced global recovery.”

He added that a rebalanced Chinese economy would also make headway toward “our shared environmental goals” by putting China on a “less carbon intensive and more energy efficient path.”

For China’s part Wang Qishan, the Chinese vice-premier, said the two sides were “joining hands” to overcome the global financial crisis although he warned against letting the US dollar slide too far.

“As a major reserve currency-issuing country in the world, the United States should properly balance and properly handle the impact of the dollar supply on the domestic economy and the world economy as a whole,” he said.

Wang said the officials had agreed it was important for both governments to maintain spending to help maintain the momentum of economic recovery.

“The two sides recognised that at this crucial, critical time when the global economy is moving out of the crisis and toward recovery, to stimulate economic growth remains the top priority for China-US cooperation,” he said.

The tone of the talks appeared to dodge more controversial issues that have frequently strained China-US relations, with little mention of US concerns over the value of China’s currency, the yuan, and only a passing acknowledgement of human rights issues.

In comments after the talks, Wang praised the US for what he said was its “moderate attitude” to the recent ethnic unrest in China’s western Xinjiang region which saw nearly 200 people killed.

He also called on Washington to “restrain” Uighur leaders living in the US from conducting activities against China.

The US had called “on all sides to exercise restraint” shortly after the clashes began in early July.

Speaking to reporters after the Washington talks, Clinton said Xinjiang was one of a number of human rights cases raised with Chinese officials.

“It was certainly a matter of great interest and focus,” she said without elaborating. 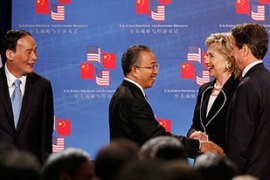 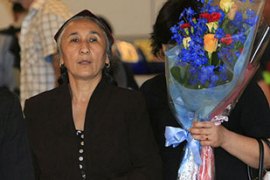