Mullah Omar is quoted as saying that creating a new mujahideen group or battalion is forbidden.

“If unofficial groups or irregular battalions refuse to join the formal structure, they should be disbanded,” Omar says.

Individual Taliban commanders have so far had a fair degree of autonomy, often deciding what operations to conduct and how to run the territory that they control.

Our correspondent said the regulations seem to be an attempt by Mullah Omar to bring all of the Taliban under his control.

“We have in the past had a lot of different groups in Afghanistan operating under the umbrella of the Taliban,” Bays said.

“But it says in these regulations that if you find an irregular battalion that is not obeying orders then what you have to do is find that battalion and then disarm them.”

Michael Griffin, an Afghanistan expert and author of the book Reaping the Whirlwind: Al Qaeda and the Holy War, told Al Jazeera: “The Taliban … is flirting very closely with criminality on a very, very, large scale.

“If you think of the New York Times reporter who was kidnapped in November last year and released for $8m, this was a criminal act and has nothing to do with the Taliban as a political and military force.

“I think [Mullah Omar is] trying to bring all the disparate elements in the Taliban together under one umbrella to somehow isolate and and separate the elements which are simply criminal.

“But this is a difficult cause because there are a lot of people in the Taliban because it pays them.”

While the Taliban have repeatedly used suicide bombings across Afghanistan, the book now says that they should be used only on high and important targets.”

“A brave son of Islam should not be used for lower and useless targets. The utmost effort should be made to avoid civilian casualties,” the book says.

There are now clear guidelines on how the Taliban will treat its prisoners as well.

“Whenever any official, soldier, contractor or worker of the slave government is captured, these prisoners cannot be attacked or harmed,” it says.

“The decision on whether to seek a prisoner exchange or to release the prisoner with strong guarantees will be made by the provincial leader.

“Releasing prisoners in exchange for money is strictly prohibited.”

The book further states that if a “military infidel” is captured, the decision on whether to kill, release or exchange the hostage is only to be made by the Imam, a reference to Mullah Omar, or deputy Imam.

The book makes it clear that it is the duty of every fighter to win over the local population.

“The mujahideen have to behave well and show proper treatment to the nation, in order to bring the hearts of civilian Muslims closer to them.

“The mujahideen must avoid discrimination based on tribal roots, language or geographic background.”

Our correspondent said the reference to winning over the hearts of the Afghan people is very similar to language used by Nato-led military forces in the country.

“Recently the Nato commander here issued a new tactical directive saying that civilians should not be bombed – almost the same words in these regulations to Taliban fighters,” Bays said.

“Both sides [are] trying to win over the civilian population in their area.”

The release of the rule book comes less than a month before Afghans head to the polls for a presidential election, which the Taliban has deemed an illegitimate system imposed by foreigners.

The timing may be just a coincidence, however, as rival presidential candidates detail their manifestos and the Taliban makes an effort to win over the Afghan public. 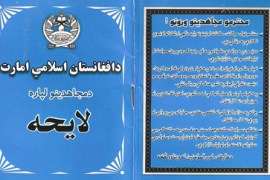 The book sums up what the Taliban calls “Rules for Mujahideen”.