The strikes have crippled public services in Johannesburg and other major cities across the country.

They come in the wake of days of violent protests over a lack of basic services and jobs in which police and demonstrators have repeatedly clashed.

As the strikers marched through Johannesburg, hundreds of passengers were stranded in the city’s central business district.

Simon Riekert, a spokesman for the Independent Municipal and Allied Trade Union, told Al Jazeera: “We are in a position to be amicable as far as any agreement is concerned. However, we want the employers’ organisations and the government to come to the table and negotiate on a bona fide position.”

The unions want a 15 per cent salary increase to cushion their members as the country grapples with its first economic recession in 17 years.

Employers increased their offer from 11.5 per cent to 13 per cent on Monday, but this was rejected.

The strikes are the latest sign of discord between the ruling ANC government and its labour union allies which helped Jacob Zuma win the presidency in April with promises to improve the lives of millions of South Africa’s poor.

Al Jazeera’s Haru Mutasa, reporting from Johannesburg, explained that Zuma had promised 500,000 jobs by the end of the year and people were waiting for those jobs to materialise.

People were frustrated and the fear was that if the municipal workers did not go back to work, people in the townships – the ones who are most angry – would take to the streets again and trigger move violence, our correspondent said. 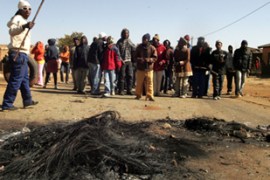 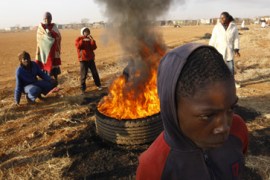 Can Zuma walk his talk?

S African president’s credibility hinges on whether he fulfils his promises to the poor. 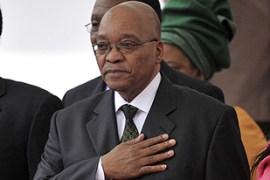 Protesters clash with police in Siyathemba township over lack of basic services.