“We further conclude that the credible peace process for which the Quartet hopes, as part of its strategy for undercutting Hamas, is likely to be difficult to achieve without greater co-operation from Hamas itself.”

The committee, made up of MPs from all the main political parties, said it was dismayed that, six months after the end of fighting in Gaza, there was still no ceasefire agreement between Israel and Hamas.

There had been little change to several issues that contributed to the conflict, it said.

“We conclude that this situation makes for an ongoing risk of insecurity and a renewed escalation of violence,” it said.

Herb Keinon, the diplomatic correspondent for the Jersualem Post newspaper, told Al Jazeera that the even if Britain did engage with Hamas it was unlikely to change Israel’s position.

“Israel’s position has been consistent on this issue for a number of years,” he said.

“If Hamas accepts the three preconditions: If they recognise Israel, the they foreswear terrorism, if they recognise the previous agreements, there is something to talk about. If they don’t do that then Israel won’t talk with them.”

The committee’s report also said that the MPs were concerned that the Quartet was failing to provide Hamas with greater incentives to change its position.

It said Britain should talk to Hamas moderates as a way of encouraging the group to meet the Quartet principles.

Zaki Chehab, the author of Inside Hamas and editor of Al Hayat newspaper, said that Hamas needed the West to enter into dialogue with the movement.

“They are cornered in Gaza, Israel to one side, the sea behind them, and Egypt is in complete control of the border,” he said.

“At the end of the day Hamas want to see the outside world talking to them, but the problem here is not Hamas accepting to talk, it is what the West is going to offer Hamas.”

In March, the British government changed its policy by saying it was open to talks with the political wing of Lebanon’s Iranian-backed Hezbollah, but it remains opposed to talking to Hamas.

The committee said that “the government should set out the relevant differences between the cases of Hezbollah and Hamas that lead it to conclude that engagement with moderate elements within Hamas is not currently worth attempting”.

The British foreign ministry said it would “consider carefully” the recommendations in the report.

It said that the government was “making progress on the peace process, which remains a high priority for the Government, and we shall continue to work hard to bring about a just and lasting peace. 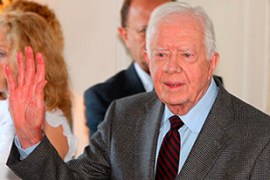 Former US president wraps up his Middle East tour aimed at Arab-Israeli peace.