Israel and Washington suspect Iran of trying to develop nuclear weapons, a charge it has repeatedly denied.

“It is our right to have peaceful nuclear activities. Nuclear weapons have no place in our defence structure,” Qashqavi said.

Iran has defied UN Security Council sanctions by continuing to enrich uranium, a process which makes fuel for nuclear power plants but some nations fear could also be used to form an atomic bomb.

Proliferation experts widely agree that Israel is the only country in the Middle East with nuclear weapons.

Israel refuses to confirm or deny whether it has a nuclear arsenal and continues to campaign against Iran’s nuclear programme.

Analysts estimate that Israel has up to 200 long-range nuclear warheads.

In a documentary aired on Israeli television in 2001, Shimon Peres, the Israeli president, said that France agreed in 1956 to provide Israel with “a nuclear capacity” as part of secret negotiations ahead of the invasion of Egypt in the Suez crisis. 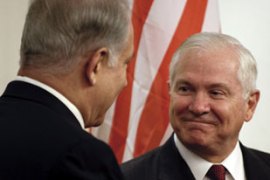