“They are trying to cross the line of police and military to be able to walk all the way to the border.”

Several military and police checkpoints are in operation between the Honduran capital Tegucigalpa and El Paraiso, Sanachez said.

People wishing to reach the frontier by car or bus are being forced to leave their abandon their vehicles about 50km from the border but can proceed by foot, Sanchez said.

After he reached Esteli, Zelaya said he hoped Honduran troops at the border would “lower their guns” when they saw him.

“We go with the white flag of peace to proclaim reconciliation for the Honduran people,” he said.

“I know that I am in danger, at risk, but I am ready to make the sacrifice, because Honduras needs peaceful change.”

The interim government in Honduras, led by Roberto Micheletti, has threatened to arrest Zelaya, who was overthrown in a military-backed coup on June 28, if he sets foot in the country.

Zelaya said he would attempt to return to Honduras on Saturday. It is not clear when he will attempt to enter Honduras, or how he will do it.

Allan Fajardo, a spokesman for the ousted leader, said he could travel by air, sea, or land from any of Honduras’ three neighbouring countries – Nicaragua, Guatemala and El Salvador.

The US and Latin American governments have demanded Zelaya be reinstated but Honduras’ de facto rulers are refusing to agree.

An attempt earlier this month by Zelaya to return in a Venezuelan aeroplane was thwarted when the military blocked the runway.

US-backed mediation attempts in Costa Rica broke down earlier in the week.

Oscar Arias, the Costa Rican president who led the talks, said the de facto leaders of Honduras risk becoming international pariahs if they do not agree to back down.

[The interim government of Honduras] is completely isolated. They have become the North Korea or the Albania of Central America,” he said on Wednesday.

The Organisation of American States, or OAS, warned the de facto government that it needs to agree to Arias’ proposal.

Barack Obama, the US president, has condemned the coup and cut $16.5m in military aid to Honduras.

He has also threatened to slash economic aid to what is one of Latin America’s poorest countries. 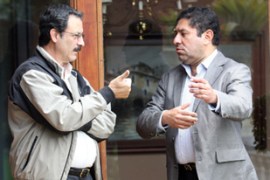