Footage from the day of the attack then shows apparently the same man wheeling a suitcase and with a backpack in front of his body walking towards a meeting room next to the lobby.

Jakarta-based broadcaster Metro TV says the man could be Nurhasbi, who attended the same school as several members of Jemaah Islamiyah (JI), the group named by Indonesian police as the prime suspect in the attacks.

JI has been blamed for a series of bombings in Indonesia, including the 2002 Bali nightclub attacks that left 202 dead.

Forensic investigators probing Friday’s attacks say they are trying to rebuild the faces of the two suspected bombers in order to identify who carried out the attacks.

So far Indonesian police have only identified one of the attackers simply as “N”.

Indonesian media reported that police had visited Nurhasbi’s family, possibly to assist in DNA tests to try to identify bodies at the scene of the blasts.

Police suspect the bombers checked into the Marriott as paying guests on Wednesday and assembled the devices in room 1808, where a third bomb in a laptop computer bag was found and defused.

On Monday police sources told the Reuters news agency that one theory is that the bombers had planned to set off the bomb on the 18th floor first, sending panicking guests rushing down to the lobby where an accomplice would detonate another, with maximum impact.

Al Jazeera’s Step Vaessen reporting from Jakarta said the new footage has dealt a major blow to security measures in the capital and raised many questions including how the explosives made it into the hotel without being detected.

Police reportedly found two decapitated bodies believed to be those of the suicide bombers, and the investigations are expected to take months to complete.

On Sunday Major-General Nanan Sukarna, a spokesman for the national police, said the unexploded bomb found at the Marriott was “identical” to devices used in the Bali attacks in 2002 and 2005 that left more than 250 people dead.

The bomb equipment used was also similar to some that police recently found during raids in the town of Cilacap in Central Java.

Friday’s bombings ended a four-year lull in violence and, according to police and security analysts, carried the hallmarks of JI, in particular of a breakaway faction led by key member, Noordin Md Top.

Noordin, a fugitive Malaysian bomb-maker, has been blamed for previous attacks on foreigners and Western targets including bars and hotels. 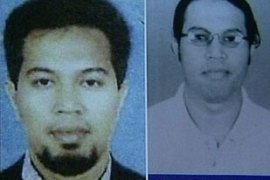 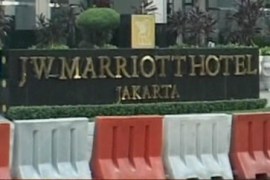 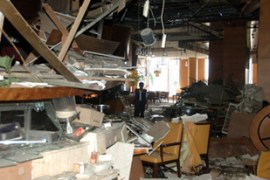 Security procedures under scrutiny in Indonesia after deadly blasts in two luxury hotels.