In one attack a 29-year-old Australian miner was shot and killed.

“We are still questioning (the suspects) intensively to determine their role in the three (fatal) shooting incidents, ” Ekodanto told the Associated Press.

A four decade old, low-level insurgency against the government has been raging in Papua, and members of the Free Papua Movement – who see Freeport as a symbol of outside rule – were initially blamed by authorities for the latest violence.

But some analysts believe the shootings resulted from rivalry between the police and military over multimillion dollar illegal gold mining or protection businesses at the mine.

Others have blamed criminal gangs.

“We are pleased that apparent progress has been made in identifying the perpetrators,” Freeport said in a statement.

“We are continuing to work with the police and other governmental authorities to ensure that our operation is secure.”

The shootings were the worst violence at Freeport since the killing of three school teachers, including two Americans, in August 2002.

Papua, a desperately poor mountain province, lies some 3,400km east of the capital, Jakarta. Many local residents complain that they are not benefiting from the depletion of the region’s natural resources.

Foreign journalists are prohibited from visiting the highly militarised province of around 2.5 million people. 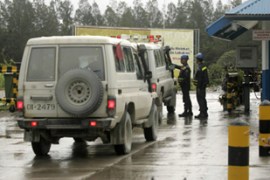 Two Indonesian police wounded in latest in spate of attacks near US-owned gold mine.

Indonesian police says separatists behind spate of deadly attacks near US mine. 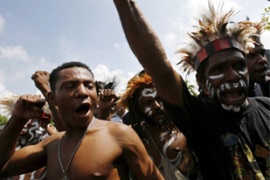