The generals are the most senior military figures to stand trial on coup charges in a country where the army has toppled four governments since 1960.

Other defendants include journalists and academics known as critics of the ruling Justice and Development Party (AKP).

The two are accused of being leaders of Ergenekon, a nationalist-secularist network which allegedly had a broader plan to plunge Turkey into political chaos, using assassinations of prominent people, to pave the way for a coup.

Eruygur, who suffered a serious brain trauma after falling from stairs in prison, was not present at the hearing, which dealt largely with procedural formalities.

Coup allegations first surfaced in March 2007 when a magazine published excerpts from the purported diary of a former navy commander, which described how several generals plotted coups but failed to secure the support of top generals.

Following retirement, the indictment says, Eruygur and Tolon used civic groups to incite public opinion against the AKP in line with their aims.

Eruygur was the head of a secularist association that led mass rallies against the AKP in 2007.

Both generals, who are in their late 60s, risk life sentences if convicted.

Among the other suspects in the dock on Monday were Tuncay Ozkan and Mustafa Balbay, two senior journalists, whose alleged diary mentions purported coup plots.

Ozkan, who spoke briefly at the hearing, slammed the case as a politically-motivated campaign against AKP opponents.

“I am a political prisoner. I did not commit any crime,” he said, urging the court “not to let the government gag neither me nor others”.

The 56 suspects are the second group to go on trial over alleged links with Ergenekon.

A first group of 86 people, which also included several senior military personnel, went on trial in October in an ongoing case.

It was unclear if the presiding judge will decide to merge the proceedings of the two trials.

The court adjourned Monday’s trial to August 6 to consider a series of procedural objections by the defence. 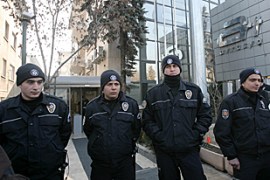 Police detain at least 18 people, including a university head, over alleged coup plot. 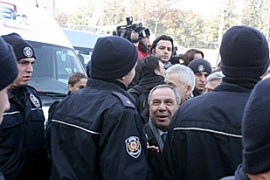 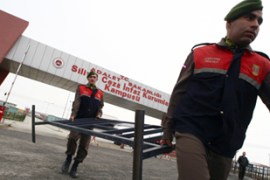 Trial of 86 people accused of plotting coup is adjourned after rowdy scenes in court. 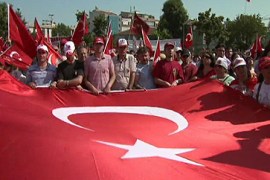 Video: Turkish trial of the century

Gang accused of trying to overthrow the Turkish government set to face trial.