Other groups have also said that they would lay down their arms after Okah’s release.

But Abubakar Momoh of Lagos State University said the Nigerian government, which relies on oil for more than 90 per cent of its export earnings, had to do much more than just release Okah to achieve peace in the delta.

“What the government has done in the case of Okah is like treating the symptom and not curing the disease,” he said.

“That will not put an end to militancy there because there are many Henry Okahs there.

“There are issues that drove the militants to the trenches. Until those issues are resolved in a fair and just manner, there will never be peace in the Niger Delta.”

State-run Nigerian National Petroleum Corporation (NNPC) says that monthly oil revenue this year has dropped to around $1bn from an average of $2.2bn in 2008.

Mend called Monday’s attack on the depot and loading tankers moored at the facility “unprecedented”.

“We encountered some slight resistance from the Nigerian navy guarding the facility but they were easily overpowered. Over nine may have been injured or killed,” it said.

It took rescue workers around six hours to extinguish the fires that were apparently started after explosives were used to destroy part of the facility.

Until now, Mend had largely concentrated its campaign on oil facilities and government targets inside the delta region. 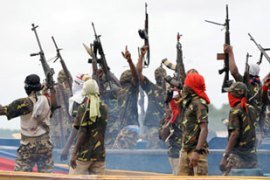 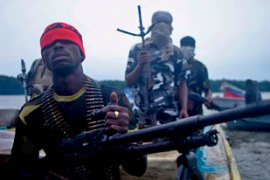 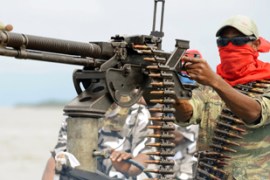 Nigeria rebels vow ‘all out war’

Armed group set to step up violence in delta region after urging oil workers to leave.