“The peace process has been moving at the speed of a turtle. Tonight, Netanyahu has flipped it over on its back,” he said.

Netanyahu told an audience at Bar-Ilan University in Tel Aviv on Sunday that he would require international guarantees that any Palestinian state would have no army or control of its airspace and borders, and would recognise Israel as a Jewish state.

“If we receive this guarantee … then we will be ready in a future peace agreement to reach a solution where a demilitarised Palestinian state exists alongside the Jewish state,” he said.

“Israel needs defensible borders, and Jerusalem must remain the united capital of Israel with continued religious freedom for all faiths.”

The so-called “road map” towards a two-state solution, which was agreed by the two sides in 2003, talks of a sovereign Palestinian state within the pre-1967 borders, which would include the east Jerusalem as well as the West Bank and Gaza Strip.

Mustafa Barghouti, an independent Palestinian MP, told Al Jazeera that by applying the conditions, Netanyahu had effectively refused the formation of a Palestinian state.

“He wants to substitute a Palestinian state for a ghetto with no sovereignty, with no control of its land, of its resources, of its passage, of its roads, of its airspace, of its borders,” he said.

“This is a game, he just used the word state to mislead the world.”

The United States and European Union – both members of the so-called Quartet of Middle East mediators – gave a cautious welcome to Netanyahu’s speech.

Robert Gibbs, a White House spokesman, said that Netanyahu had made “an important step forward” and reiterated Washington’s committment to a Palestinian state “in the historic homeland of both peoples”.

Jan Kohout, the Czech foreign minister, who’s country holds the rotating presidency of the EU, said that speech was “a step in the right direction”.

“Of course, there are a number of other elements which need to be analysed, but the acceptance of the Palestinian state is there,” he said.

However, Netanyahu refused to concede to US demands for a complete halt to all settlement expansion, as set out in the “road map”.

“We have no intention of building new settlements or of expropriating additional land for existing settlements,” he said.

“But there is a need to enable the residents to live normal lives, to allow mothers and fathers to raise their children like families elsewhere.”

The Israeli prime minister also urged the Palestinian Authority in the West Bank to re-establish “the rule of law” over the rival Hamas movement, which seized full control of the Gaza Strip two years ago.

“Israel will not sit at the negotiating table with terrorists who seek their destruction.”

Sami Abu Zuhri, a Hamas spokesman, dismissed Netanyahu’s comments and said that the Palestinians would continue to fight for their rights.

“His racist speech and his policy on the ground – the extention of Jewish influence in Jerusalem, settlements in the West Bank and the siege in Gaza – proves he is lying about his desire for peace,” he said.

“He will never trick us and we will continue to demand our rights and our Palestinian lands.”

Israel and the Palestinians relaunched peace negotiations at the Annapolis conference in the US in November 2007, but the talks made little progress and were suspended during Israel’s war on Gaza last December and January.

The Palestinians have said that they will not restart negotiations unless Netanyahu publicly backs a two-state solution and stops the building of Jewish settlements on Palestinian land. 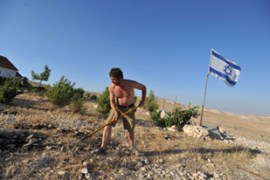 US welcomes “step forward” after PM demands any Palestinian state be demilitarised. 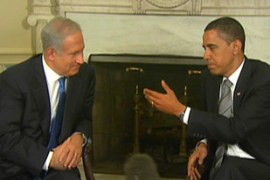 Israeli PM set to outline his vision of how to advance the Middle East peace process.