About 50,000 South Ossetians were eligible to vote in the elections and polling stations have been set up in Russia for expatriates and refugees who fled the region during the war.

Four parties are competing for the 34 seats in parliament but the central election commission has barred the only two parties not loyal Kokoity.

“I plan to sit at home. There’s nothing we can do,” he said.

The opposition also accuse the president of embezzling funds allocated for restoration of infrastructure destroyed in the war.

Kokoity has rejected the accusations against him as Georgian propaganda.

The president pledged they would be carried out strictly in accordance with law, calling the polls a “maturity test for the small independent state”.

Most world powers consider South Ossetia as part of Georgia, but Tbilisi lost control over the region in a war in the early 1990s as the Soviet Union fell apart and many South Ossetians feel closer to Russia. 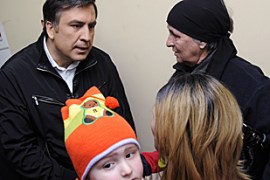