Tens of thousands of people were left homeless after their homes were swamped by the deluge, Prothom Alo, a Bangladeshi newspaper, said.

The cyclone had packed winds of up to 100kph before it began to weaken.

Authorities in West Bengal restored train and air services and reopened schools in most parts of the state on Tuesday, Indian officials said.

Several rivers burst their banks inside the Sundarbans Tiger Reserve at the height of the cyclone, said Khalil Ahmed, the area’s district magistrate.

It was difficult to assess how the storm and flooding has affected the tiger population in the region as water levels were too high for ecologists and forest officials to survey the area, said Mrinal Chatterjee, the project director of the Institute of Nature Lovers and Climbers, an environmental group.

About 250 tigers are estimated to live in the Indian side of the Sundarbans reserve, with another 250 thought to reside in the Bangladeshi side of the conservation area. 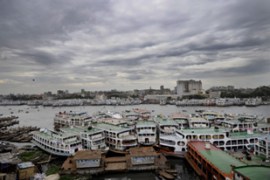 Deaths in Bay of Bengal cyclone

Thousands left homeless as storm sweeps over parts of India and Bangladesh.