The president made the announcement as campaigning for the country’s June 12 presidential election officially started.

The launch comes two days after Barack Obama, the US president, said he would give Tehran until the end of the year to show it wanted to engage with Washington.

Obama also declared a readiness to seek tougher international sanctions against Tehran if it did not respond positively to US attempts to open negotiations on its nuclear programme.

Hours after Wednesday’s test was reportedly conducted, numerous US defence and intelligence officials declined to even acknowledge the Iranian launch had occurred.

Some referred calls to the White House and state department, signalling how politically sensitive the development is to the Obama administration and its efforts to engage Iran on its nuclear programme.

Hillary Clinton, the secretary of state, appearing before the Senate Appropriations Committee on Wednesday, said nothing directly about the launch when the issue was raised by the committee.

But she did discuss the subject generally, saying that a nuclear-armed Iran would “spark an arms race” in the Middle East.

“A nuclear-armed Iran with a deliverable weapons system is going to spark an arms race in the Middle East and the greater region,” she said.

Clinton reiterated that the administration opposes Iran obtaining nuclear weapons capability and that it is relying, for now, on diplomatic pressure to stop it.

“Our goal is to persuade the Iranian regime that they will actually be less secure if they proceed with their nuclear-weapons programme,” she said.

Ahmadinejad has repeatedly said his government intends to pursue its nuclear programme – which it says is for peaceful energy purposes – even at the risk of further international sanctions.

Tehran resumed its programme to enrich uranium in early 2006 and has since refused to suspend it despite five UN Security Council resolutions, including three imposing sanctions.

Robert Gates, the US defence secretary, provided the first official US confirmation of the launch several hours after it occurred, telling the congressional House Appropriations Committee that “it was a successful flight test”.

He said the missile had a range of 2,000km to 2,500km, putting Israel, US bases in the Middle East, and parts of Eastern Europe within striking distance.

“Because of some of the problems they’ve had with their engines we think, at least at this stage of the testing, we think it’s probably closer to the lower end of that range,” he said.

US government officials and independent American missile experts said that the missile did not appear to be a new model.

A US defence official said the missile appeared to be consistent with Tehran’s older Ashura models, long known to US intelligence.

And Charles Vick, a senior technical analyst for GlobalSecurity.org, said he was “not all that impressed”.

“It’s just another test that confirms they’ve got the system that was operational last summer,” he said. 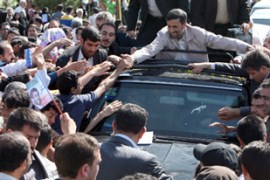 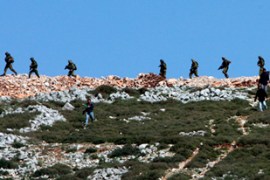 US presses Israel on settlements

Clinton urges stop to “any kind of settlement activity” and a move towards two states. 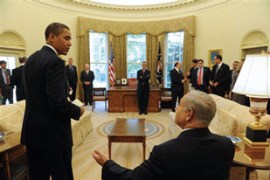 Obama and Netanyahu differ in talks

Israeli PM refuses to endorse two-state solution at meeting with US president.