“There is no reason to do that. It’s not a swine influenza, it’s a human influenza,” he said.

The move to slaughter the pigs, kept mainly by the country’s Christian minority, sparked an angry response from farmers, who said reported government pledges of compensation of $105 per animal were inadequate.

Clashes were reported in Khanka, 25km north of Cairo, with pig farmers setting up road blocks and smashing the windscreens of veterinary services’ vehicles as they sought to take people’s pigs away.

“Our pigs are healthy. They are our capital and they have no diseases,” Adel Ishak, a rubbish collector from Manshiet Nasser, northeast of Cairo, told the AFP news agency.

“How will they replace the capital if these pigs are killed?”

But Egypt’s fears that a pandemic could have a devastating impact in a country where most of the country’s estimated 80 million people live in the densely packed Nile Valley, is shared by several other countries, which have banned or restricted pork imports despite WHO’s statement that eating pork is safe.

Russia has banned meat imports from Mexico, as well as US states where cases have been confirmed, and banned raw pork from several other US states.

China, the world’s biggest pork consumer, has banned imports of live pigs and pork from Mexico and the US states of Texas, California and Kansas.

Officials in the US and Europe have called for the disease to be given a different name to prevent consumers being put off eating pork, which could severely hurt the $25bn a year international trade in pork products, with the EU, US, Canada and Brazil the biggest exporters.

WHO officials say the disease was given the name because it derives from a swine flu virus. Experts believe the H1N1 virus mutated from pig, bird and human viruses. 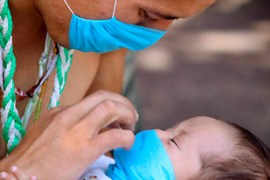 WHO raises alert to second highest level and urges all countries to “activate pandemic preparedness plans”.