“All of this has been conceived in connection with the current internal developments.

“But as recent developments have shown, no matter how much money comes from abroad, Georgia is a stable country and it is impossible to create serious turmoil.”

Dozens of protesters spent Monday night camped in tents outside Saakashvili’s presidential residence, after opposition leaders announced they would protest around-the-clock to intensify pressure on the president.

As the sixth day of protests began in the capital, demonstrators said they would continue to protest until Saakashvili steps down.

So far, the president has remained firm, vowing to serve out his second term, which ends in 2013.

Opposition leaders are unhappy with Saakashvili following last year’s conflict with Russia, in which Georgia lost territory as separatists and their Russian allies took full control of South Ossetia and Abkhazia.

Critics have also accused him of not implementing political changes that he promised during a revolution in 2003, in which Saakashvili came to power.

They say he has monopolised power and exerted pressure on the judiciary and the media.

Saakashvili’s government says it has held talks with the opposition in the past and is willing to enter into a “constructive dialogue” with them.

The protests began in Tbilisi last Thursday when 60,000 people took to the streets and rallied outside parliament.

But the numbers of demonstrators dropped away over the weekend, with only 4,000 gathering on Saturday. 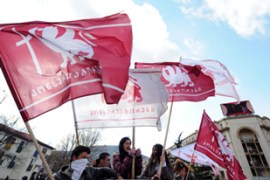 Number of demonstrators dwindles as president vows he will not give in and step down. 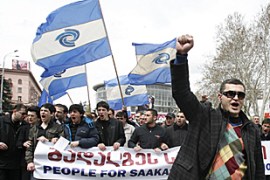 Tens of thousands of people in Tbilisi call for resignation of president. 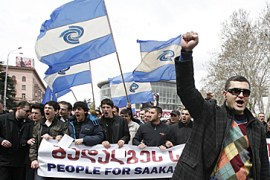 Tens of thousands of protesters rally outside parliament in Tbilisi demanding that the country’s president resign. 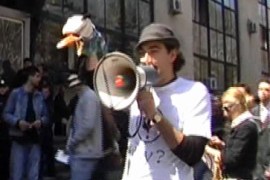 Georgia’s opposition urges the president to step down.