“The elections took place despite some incidents and attempts to disrupt them. This is a victory for the Algerian nation as it builds democracy,” he said.

The large turnout suggests that most of Algeria’s 34 million citizens did not follow calls from the opposition, led by two left-leaning secular parties, to boycott the election.

However, in Kabylie province, east of Algiers, very few people turned out to vote,  the Reuters news agency said.

Bouteflika was only able to run for office again because legislators recently abolished term limits, a move that could allow him to serve for life.

The Front of Socialist Forces, one of the opposition parties that boycotted the vote, has accused the authorities of inflating the turnout figure.

“(There was) a real tsunami of massive fraud which reached an industrial scale,” the party said in a statement.

Bouteflika, who is directly in control of the country’s large military and security forces, has demonstrated his domination of Algeria’s political world.

Supporters highlight his success in bringing Algeria back to stability after the civil war in the 1990s which killed about 150,000 people.

“I was a little surprised by the high turnout in provinces that used to boycott (elections),” Mohamed Lagab, professor of political science at Algiers University, said.

“The high turnout means that the supporters of the boycott have neither political nor social influence.”

But a London-based writer on North African issues told Al Jazeera that Bouteflika may have wanted to show the other opposition parties that he was the only one who could sort out Algeria’s problems.

“I can’t remember when any dictator won that percentage in votes,” Mohammad Bin Madani, editor of The Maghreb Review, said.

“Everyone knew he would win because he has the state machine behind him – money, the state organisation, which none of the other parties have.”

Turmoil in Algeria, an Opec member, could directly affect energy prices and disrupt the fight against al-Qaeda.

With segments of the population detached from the political process and struggling financially, some analysts fear a possible increase in al-Qaeda-linked violence in Algeria.

Official figures put unemployment at 12 per cent, but among those under 30, the figure rises to 70 per cent. These statistics have prompted Bouteflika to pledge $150bn to modernise and create new jobs.

Despite Algeria’s massive oil and gas reserves, its economic growth is relatively modest. 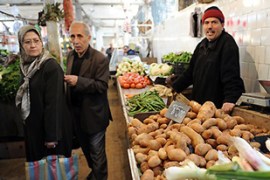 Algeria heads to the polls

Abdelaziz Bouteflika is expected to win a straight third term as president. 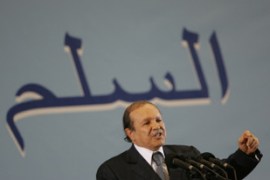 Vote in favour of constitutional amendments could extend Bouteflika’s rule. 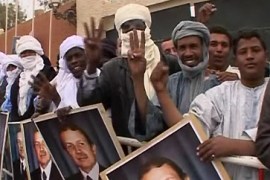 Opposition claims that upcoming polls will be a sham.