“This is the time to work together,” Benedict said in a message read by Monsignor Georg Gaenswein, his secretary.

“Only solidarity will allow us to overcome this painful trial.”

Sabina Castelfranco, Al Jazeera’s correspondent in L’Aquila, said: “Smaller white coffins were placed on top of the larger ones holding the remains of some of the 20 children and teenagers who were killed.

“At the end of the service, an Islamic rite was held for six Muslim victims, two of them Palestinians.

“The search for survivors who could still be trapped under the rubble has been extended until Sunday.

“A feeling of fear persists among the population here. The aftershocks continue in this area, some of them strong, and many ask themselves when will all this come to an end.”

He offered his villas to some of those made homeless by the earthquake, which caused further devastation by a series of aftershocks.

“Many people have already offered up their houses to help the homeless from the earthquake and I too will do what I can by offering some of my residences,” he said.

Berlusconi owns at least four luxury villas in various parts of the country.

Earlier, he said he would try to access hundreds of millions of euros in EU disaster funds to rebuild the region within two years.

In a first estimate, the Italian government said $1.7bn would be needed to repair or rebuild about 10,000 buildings damaged or destroyed in the quake.

Donations poured in on Wednesday to special bank accounts set up to help the survivors.

The Italian senate’s 315 members decided to have $1,323 deducted from their salaries for the cause.

And Italian football teams pledged revenue from this weekend’s matches, while universities and newspapers took collections.

The government has announced an enquiry into the tragedy, after Giorgio Napolitano, Italy’s president, said bad construction may be behind the collapse of modern buildings, including a hospital and student hostel, that should have been earthquake-proof. 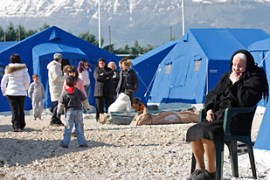 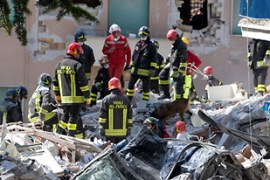 One person killed in 5.6 magnitude aftershock as quake toll rises to 235.