“Justice will be done,” Chea Leang, the co-prosecutor, said at the start of the second day of the long-awaited trial.

He said Duch and the S-21 prison he ran had played central roles in the Khmer Rouge’s iron-fisted rule.

“S-21 formed an integral and indeed vital role in a widespread attack on the population of Cambodia,” Chea Leang told the court.

“The accused’s crimes were part of this attack.”

“For 30 years, one-and-a-half million victims of the Khmer Rouge have been demanding justice for their suffering. For 30 years, the survivors of Democratic Kampuchea have been waiting for accountability,” he said.

“For 30 years, a generation of Cambodians have been struggling to get answers for their fate.”

The first day of the trial proper on Monday saw no witness testimony and Duch spoke briefly only to confirm his identity and his understanding of the charges against him.

As well as hearing from victims the trial is expected to be the first opportunity for Duch to publicly tell his side of the story.

His testimony is also expected to be vital in securing the convictions of the four other Khmer Rouge leaders awaiting trial before the tribunal.

Duch, who was a teacher before becoming the Khmer Rouge’s chief torturer, faces a maximum penalty of life in prison if convicted. Cambodia has no death penalty.

Francois Roux, Duch’s French lawyer, said last month that his client wished “to ask forgiveness from the victims, but also from the Cambodian people. He will do so publicly. This is the very least he owes the victims”.

On Monday the prosecution read out a 45-page indictment against Duch that contained a litany of grisly accounts of the alleged atrocities committed under the Khmer Rouge rule.

The Khmer Rouge executioners threw victims to their deaths, bludgeoned them and then slit their bellies, or had medics draw so much blood that their lives drained away, prosecutors said.

Duch himself allegedly oversaw the atrocities, which included snatching children from their parents and dropping them from the third floor of a prison building to break their necks.

Prosecutors alleged that Duch’s job was to extract confessions of counter-revolutionary activity but said that “every prisoner who arrived at S-21 was destined for execution”.

“Several witnesses said that prisoners were killed using steel clubs, cart axles, and water pipes to hit the base of their necks,” the indictment said.

“Prisoners were then kicked into the pits, where their handcuffs were removed. Finally the guards either cut open their bellies or their throats.”

The indictment also claims that some prisoners were killed by having large quantities of blood withdrawn by medics, leaving them “unconscious and gasping”.

Professor Alex Hinton of Rutgers University’s Center for the Study of Genocide and Human Rights, said the indictment set out in more detail than ever before the atrocities committed by the Khmer Rouge and was a critical historical record.

“They took the lifeblood of people. I think it really encapsulates the utter dehumanisation,” he said. 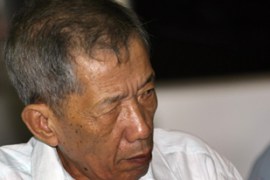 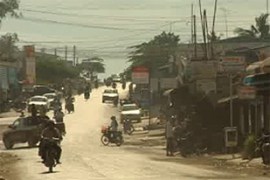 Former Khmer Rouge stronghold of Pailin emerges from the shadows of genocide. 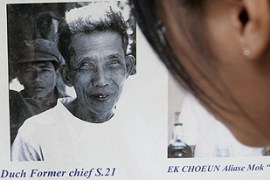 Guek Eav, also known as Duch, is accused of overseeing the torture of 14,000 people.