It upheld the suspended prison sentences against the remaining three.

Both the Farc and PFLP are classified as “terrorist organisations” by the US and the EU.

The six defendants are all connected to the Danish activist group Fighters and Lovers which describes itself as “standing up for solidarity and the right to fight for freedom”.

According to anti-terrorism legislation adopted in Denmark following the September 11, 2001, attacks in the US any direct or indirect financing of terrorist organisations is punishable by up to 10 years in prison.

Katrine Willumsen, who was sentenced to 60-day suspended prison term, said: “I’m very surprised. I still don’t think that fight for freedom is terrorism, nor should solidarity be a crime.

“Of course, we do not regret that we have raised the debate about the undemocratic terror laws. But we think this should be discussed in a free public debate, and not in a court.

“I’m angry because the verdict shows that the terror legislation is dangerous for democracy. It is time for it to be changed so that our political freedoms will again be secured.”

The ruling of the Copenhagen appeals court in 2008 had overturned a lower court ruling in December 2007 that acquitted seven defendants after finding that the two organisations were “not really terrorist” groups.

The Copenhagen court disagreed, ruling that the Farc and the PFLP are “terrorist organisations that have committed acts aimed at destabilising a state or a government and have attacked civilian targets”.

It acquitted the seventh person, a hot-dog salesman, who had placed posters of the T-shirts on his stand.

The verdict last December had marked the first time that a Danish court had ruled on how to consider Danish citizens’ support for groups that figure on the EU designated terrorist group list.

Norway has decided to no longer apply the EU terrorist list.

During this month’s trial it was revealed that in Sweden several acts of financial support for PFLP and Farc had not lead to charges being brought.

Ulrik Kohl, who was handed a six-month suspended prison sentence, said: “Instead of criminalising international solidarity, Denmark could have chosen another path, and followed Sweden and Norway.

“Denmark could instead play a positive role in the international society and work for dialogue and peaceful solutions.”

The group says it will appeal against the ruling to the European Court of Human Rights. 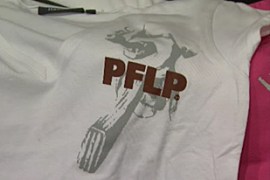