The report comes as the North is believed to be preparing to test-fire its most advanced missile, the Taepodong-2, which is allegedly capable of reaching Alaska.

South Korea also claims the North is “presumed” to have secured about 40kg of atom bomb-making plutonium from reprocessing spent nuclear fuel rods from its Yongbyon reactor.

Pyongyang carried out its first atomic test in October 2006, but it is not known whether it could manufacture a nuclear warhead.

The report also claims that the size of the North Korean military had grown to 1.19 million, an increase of 20,000 from 2006, while the number of its lightly-equipped special forces trained to infiltrate South Korea had increased 50 per cent to 180,000.

Monday’s published assessment came amid mounting tensions between the two countries, which are still technically at war since the 1950-1953 Korean conflict ended only in an armistice.

The North is angry with the government of Lee Myung-Bak, South Korea’s president, who has scrapped a policy of largely unconditional aid and engagement.

It has cancelled all military and political agreements with Seoul, including one recognising their disputed sea border as an interim frontier. 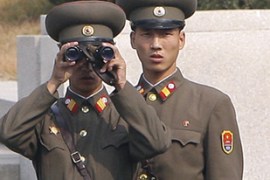 North Korea steps up threats ahead of arrival of US secretary of state in Seoul.