The move comes as the US department of justice filed a motion with a federal judge asserting that prisoners in US-run prisons in Afghanistan cannot challenge their detention in US courts.

The government said in its filing it would retain its “previously articulated position” on detainees in Bagram air base in Afghanistan, where hundreds of detainees from the US “war on terror” are being held.

The decision effectively means that the US government agrees with the previous US administration’s position that the detainees were not entitled to US legal rights or to challenge their detention at the facility.

A US district court judge hearing petitions filed by four detainees held at Bagram had given the administration until Friday to “refine” its position on the use of the air base as a detention facility.

The Times quoted Pentagon officials as saying that the military team who conducted the review investigated abuse allegations made over the prison and concluded that the Pentagon was in compliance with the Geneva Conventions’ requirements.

The review included some of the most contentious issues, including the forced feeding of hunger-striking detainees and allegations that many prisoners are suffering from mental ill health as a result of conditions in the centre, the paper said.

The Pentagon is due to deliver the report to the US president this weekend and it will be discussed in public by Admiral Patrick Walsh, vice chief of naval operations who prepared the report, next week, reports say.

The US president has also ordered Gates and Eric Holder, the US attorney general, to carry out a wider review of the future of the detainees held at Guantanamo, who include five men suspected of involvement in the US September 11, 2001 attacks.

Holder is also due to visit the detention facility on Monday.

Meanwhile, a resident of Britain held at Guantanamo will be flown back to the UK next week, the Washington Post daily has reported.

Binyam Mohamed, an Ethiopian with British residency who has been held at Guantanamo since 2004, could be released as early as Monday, the Post said, citing an unidentified source involved in the process.

The transfer from Guantanamo would be the first carried out by the Obama administration.

The Bagram ruling came even as the US military carried out a $60m expansion of the air base prison outside the Afghan capital Kabul, where more than 600 suspects are held.

The administration of George Bush, the previous US president, had argued that as “enemy combatants”, Bagram detainees had no right to challenge their detention in US courts – the same argument it made about detainees at Guantanamo.

But the US supreme court ruled last year that inmates at Guantanamo had the right to challenge their detentions in US courts, a ruling that rights groups hope will be extended to Bagram detainees.

Rumi Nielson-Green, a spokeswoman for the US military, told Al Jazeera ahead of the decision that the detainees held at Bagram were “unlawful enemy combatants”.

“They are individuals who have been removed from the battlefield because they are dangerous to our forces or our coalition partners,” she said.

However, Amnesty International said on Friday that most of the 615 detainees being held at Bagram are Afghan nationals being without access to courts or legal counsel and some have been held for years.

It urged the Obama administration to break with the previous administration’s “unlawful detention policies” by ensuring that “all US detentions in Afghanistan comply with international law”.

Obama announced earlier this week he would send 17,000 more troops to Afghanistan to fight the Taliban, putting the conflict there under increasing scrutiny. 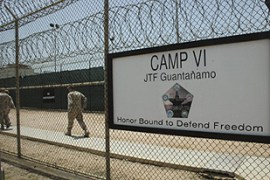 United States to free Binyam Mohamed after being held five years without charge. 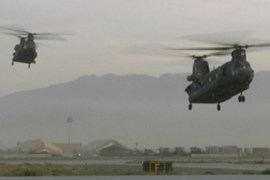 Critics fear US facility in Afghanistan could become another Guantanamo Bay. 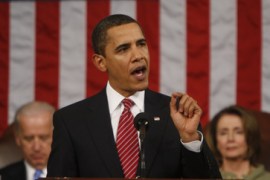 One month in Kabul 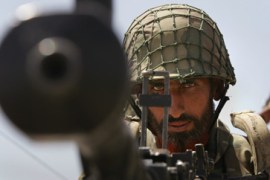