He also said that Shimon Peres, the Israeli president, should be stripped of
his Nobel Peace Prize for failing to stop the invasion.

Morales’s move follows the decision by his ally Hugo Chavez, the Venezuelan president, to expel Israel’s ambassador and embassy staff last week because of the offensive, calling it a “holocaust”.

On Wednesday, Venezuela’s foreign ministry said it had broken off diplomatic relations with Israel over the Gaza offensive.

Venezuela “has decided to break off diplomatic relations with the state of Israel given the inhumane persecution of the Palestinian people”, the foreign ministry said.

More than 1,000 Palestinians have now died in Israel’s offensive in Gaza, around 40 per cent of whom were civilians, aid agencies and Palestinian medics say. 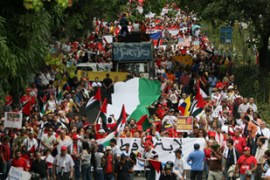 More than 1,000 people march on Israeli embassy in Caracas to urge end to offensive. 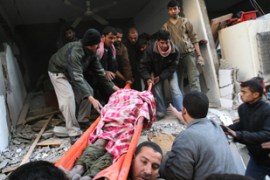