Officials throughout the Bahamas issued emergency warnings and prepared to activate hurricane shelters as residents in the northern town of Freeport stocked up on emergency supplies in anticipation of Hanna’s arrival, reports said.

In the US, emergency officials still occupied with the aftermath of Hurricane Gustav which swept into Louisiana on Monday, were faced with the likelihood that a new hurricane could strike the Atlantic coast this week.

“The situation in Gonaives is extremely urgent. I appeal forhelp,” Stephen Moise, mayor of the city of Port-au-Prince, said.

“Practically the whole city is flooded, there is water everywhere. The water is rising in some areas to more than two metres,” Moise told reporters.

“The [death] toll is only preliminary, because it is impossible to enter the city at the moment,” he said.

Residents in Gonaives told reporters that floodwaters had reached the ceilings of some homes, forcing inhabitants to seek safety on the roof.

“I have seen about 10 bodies floating in the flooded streets of the city,” Ernst Dorfeuille of the Gonaives police, said.

“I do not know how long we will stay alive,” Germain Michelet, said. “If we have to go another night in these conditions, there will not be a lot of survivors.”

The latest devastation came as Haiti and the Dominican Republic, which share the island of Hispaniola, were still reeling from Hurricane Gustav.

Gustav killed 77 people and left eight others missing in Haiti, and another eight dead in the Dominican Republic.

Only two weeks ago Tropical Storm Fay caused flooding in Haiti that left about 40 people dead. 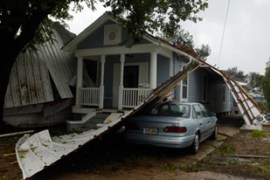