Some reports suggested Gilani’s son, Moosa, and Qamar Zaman Kaira, the federal minister for Kashmir and Northern affairs, were in the motorcade at the time, travelling to the airport to pick up the prime minister.

Officials said a formal investigation into the incident had been launched.

In the past, suspected al-Qaeda fighters have launched attacks on Pervez Musharraf – who stepped down as Pakistan’s president last month – attacks the former president only narrowly survived.

Kamal Hyder, Al Jazeera’s correspondent, who was at the scene of the assassination attempt, said questions would be asked about the lack of security.

“The question is how the sniper was able to conceal himself and how he was able to make his escape,” he said.

“Reports suggest the sniper perched himself on a hilltop on the Islamabad highway from where he would have had a considerable vantage point on the convoy.”

Mike Hanna, Al Jazeera’s correspondent in Islamabad, said the prime minister was returning from a meeting in Lahore yesterday and was due to travel to his residence after arriving at Islamabad’s airport.

“This was a highly-skilled sniping attempt, given the vehicles were moving at high speed,” he said. 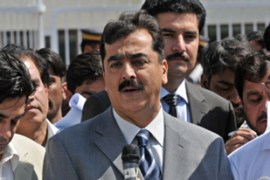 Yousuf Gilani was not in any car when the motorcade came under fire in Rawalpindi.