“We started talking in June with our development partners but unfortunately the delay has cost Pakistan quite a bit.”

Foreign ministers of Pakistan’s major donors agreed on Friday to form a partnership with Islamabad “to develop a comprehensive and co-ordinated approach to the security, development, and political needs of the border”.

The so-called Friends of Pakistan acknowledged the need for the country “to undertake serious economic reform and agreed to look at improved trade access for Pakistan to their markets”, according to a statement issued at the end of the meeting.

The group includes Britain, France, Germany, the US, China, the UAE, Canada, Turkey, Australia and Italy plus the UN and the European Union.

However, the donors did not pledge any financial assistance and another meeting will now take place in the UAE capital Abu Dhab in October.

Sherani said it was in every country’s interests for Pakistan to receive the support it was appealling for.

“Pakistan is the central front in the war against terror, internationally, and you cannot have such a vital country go down, its economy go down the way it would without support, he said.

“If this trend continues, and Pakistan is not able to get a handle on it, then certainly it will be a big, big victory for the elements that want to destabilise Pakistan.”

More than 50 people were killed in a lorry-bomb explosion at the Marriot Hotel in the Pakistani capital Islamabad on Saturday and Haroon Sharif, an economic policy expert, told Al Jazeera that the security situation has “a tremendous impact” on the cost of doing business.

“The security budgets have really gone up, the travel advisory and the frequency of travel will go down,” he said.

“People will call Pakistani entrepreneurs to go to places like Dubai or Thailand to do deals.”

Al Jazeera’s Kamal Hyder, reporting from Islamabad, said that Pakistanis were already reeling under the pressure of spiralling prices, some commodities rising by more than 100 per cent in recent months.

He said that the dire financial situation and security concerns have only served to heighten people’s concerns and shoppers were staying away from the markets even as they approach the Eid holidays. 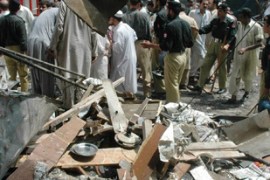 An explosion at a hotel in Peshawar leaves at least 24 people dead. 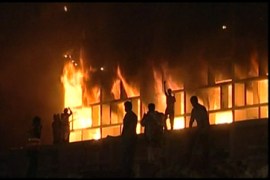 Dozens are killed in bomb attack on five-star hotel in Islamabad.

Three years ago it was the world’s best performing index, and Pakistan’s stock market has grown more than tenfold since the end of 2001.