Five air force jets flew overhead and a 21-gun salute honoured Mwanawasa as he was lowered into his grave in a copper-plated coffin.

Rifts are widening in the ruling party, which only narrowly beat the opposition at the last election, raising questions over Mwanawasa’s policies which have proved popular with international donors and investors.

Rupiah Banda, Zambia’s vice president, is acting president and among over a dozen candidates jostling to become the ruling Movement for Multiparty Democracy’s candidate in elections scheduled for November.

In addition to Banda, Ngandu Magande, the finance minister, is a leading candidate.

China, which has invested heavily in Zambia’s mining industry, sent  Yang Jiechi, the Chinese foreign minister, to attend the ceremony.

Zambian state radio quoted Mugabe on his arrival in Lusaka as saying: “Mwanawasa was a very courageous leader. He was very frank and wanted to change not only his country but the entire southern African region. We will greatly miss him.”

Mugabe had come under criticism from Mwanawasa over the situation in Zimbabwe and the widely discredited elections that returned him to power.

Jakaya Kikwete, the Tanzanian president who also holds the presidency of the African Union, paid tribute to Mwanawasa as a “visionary leader [who] worked tirelessly to promote human rights and democracy in Africa”.

“He always spoke his mind,” Kikwete told the packed funeral service at a Baptist church in Lusaka.

Mwanawasa died in Paris on August 19, in a French military hospital, following a stroke he suffered in June. 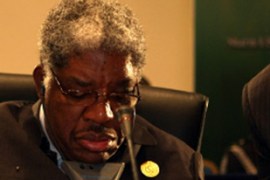